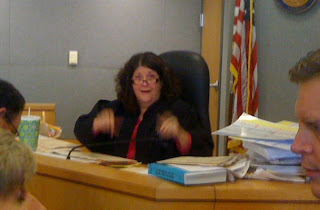 Well, today was the last official docket day for a very good friend of mine, Judge Jan Breland, so I just wanted to take a moment to wish her well as she moves toward retirement (I surprised her by snapping this picture of her on the bench during her last official docket: a jail call this afternoon in her court, County Court at Law Number 6). Judge Breland has been a great friend to me, a great colleague to work with (well, is she my colleague? She's a judge and I'm just a prosecutor, so I'm not sure that's technically correct, but we're both lawyers, and I've worked with her on a very regular basis for many years now, so she's some sort of coworker if not a colleague). I met Judge Breland on one of the first days that I was practicing law (back when I was working for my first boss, Pat Ganne), and right away she was extremely friendly and warmhearted and perfectly willing to patiently answer questions and help me out with advice (the judge had been elected to the county courts up from the JP bench and had begun serving shortly before I arrived, so we both had a bit of a learning curve in those early days).
At any rate, when I was a baby lawyer and had no idea what I was doing, back when the courthouse seemed much more intimidating and cold, Judge Breland helped put a human face on the place and served as a constant reminder that courtrooms were about people and empathy as much as law and argument. I'll admit that there were times over the years when I got a little frustrated as I stood in line or waited in Judge Breland's court to secure resets, finish pleas, or discuss cases, but when there were delays they were almost always the result of Judge Breland spending time talking to defendants- getting to know them as people, granting them common courtesy and respect, and trying to understand where they were coming from. I can say that, as a defense attorney, even when Judge Breland ruled against some of my clients, at least the clients always felt like they were treated with civility in her court and truly had a chance to have their voice heard.
As a defense attorney, of course, I truly appreciated a judge who was willing to display a little empathy and try to gain an appreciation for the life and circumstances of my clients. As a prosecutor, I try to keep these same principles in mind- holding people accountable for their actions, but trying to come at each case from a starting point that involves some measure of respect and empathy these folks as people instead of just seeing them as fungible defendants. Anyway, Judge Breland's court wasn't always the speediest court, but you always knew that she was going to consider each case very carefully and spend whatever time was necessary to get to really understand each case and know each person involved.
And her compassion and concern extended far beyond the defendants who came in front of her bench. When lawyers, courthouse staff, or anyone else that she came into contact with had a problem or was in need, Judge Breland was always one of the first people to try to extend a helping hand and ask what she could do to help with the situation. From helping me out with job recommendations to providing support for attorneys who were struggling with substance abuse problems to visiting sick attorneys in the hospital to attending funerals and carrying out weddings, I can honestly say that Judge Breland has consistently been one of the most caring, compassionate people that I've known at the Travis County courthouse since the day I met her. She was there in the hospital after Jeff and Kim and Sigmund were hit by a drunk driver, she was willing to give me some court appointments and encouragement when I was laid off from my job and looking for other work, she got childhood pictures of me from my mom and used them to embarrass me a bit on my birthday, and she's just generally been a good friend- always happy to pull up a chair and spend some time listening to gripes, swapping courthouse gossip, and sharing funny stories.
Anyway, Judge Breland is still going to be around and practicing with us as a visiting judge, so I shouldn't get too carried away here with fond remembrances and farewells, but, still, as she leaves the bench I can't help feel like it's kind of the end of an era- not only for the Travis County criminal courts, but for me, personally. Even though I know she'll be around, I'm going to miss the idea that I can just go find her in Court 6 on any given day. And the courthouse really will be a poorer place if it comes to lack the empathy that she brought to the bench. Hopefully her example in that regard won't be forgotten.
At any rate, I wish you the best of luck, Judge, and I hope we still see you around on a really regular basis. (and, courthouse stuff aside, we need to grab lunch/dinner sometime, anyway) I have no doubt that, retirement or not, you'll still be hooked into all of the courthouse news that's worth knowing!
We'll all miss you!
Posted by J.S. at 10:08 PM