Howdy! I don't have a ton to report on, but I thought I'd check in since it's been a while. Let's see....
Last weekend was Halloween weekend, of course. The scariest part of it was watching the Longhorns melt down at our home stadium while playing Baylor. There are just so many things going wrong with UT that's it's really pretty difficult to narrow the problems down to any single area which needs improvement (our receivers keep dropping balls, we've had bad play calling, the defense hasn't met expectations, and Gilbert, despite showing some improvement, just isn't showing himself to be the sort of quarterback that UT had gotten used to during the Young/McCoy years) . Anyway, I went to the game with Amy and her mom, Jean, who was in town visiting from Phoenix, and we had a pretty good time in spite of the poor performance by the Horns.
One curious aspect of the game (aside from people dressed up as giant chockens and so forth in celebration of Halloween) came from repeated ads on the Jumbotron for the new Naughty Volvo. 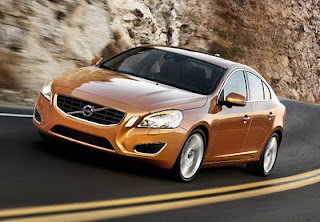 Really? They showed the ads repeatedly during the game, and as we saw them again and again I (or we, actually) couldn't help but speculate about what made this particular Volvo so naughty. It doesn't look particularly naughty, but maybe it has available naughty options that other cars just don't offer? At first I thought that someone in Volvo's marketing department must have just done a poor job with translating a Swedish name, but upon examining the website it seems clear that the folks at Volvo actually did, in fact, intend to suggest that this particular car is naughty. I can only assume that at some point they'll be offering an offroad SUV version called The Filthy.


Anyway, the game was fun, and it was really nice to meet and hang out with Jean!


Sunday, on Halloween itself, Amy came over and we watched Night of the Living Dead (one of my favorites, which Amy had never seen) and handed out candy. We didn't get a ton of trick or treaters, but there was a bit of a snafu in terms of having the porch light off for a while, so we might've missed a few. Anyhoo, it was a nice Halloween, hanging out with Amy and sharing one of my favorite flicks with her (she's a bit averse to scary movies, so I thought it was really cool that she was willing to watch one for Halloween).
The rest of the week was pretty busy at work. We're shooting for the launch of our first official Veterans Court docket next Wednesday (the courts are actually shut down for Veterans Day the following day), so that's pretty cool. I'm definitely more than ready to move this thing up and out of the discussion stage and start putting it into practice. Hopefully this docket will end up being a good thing for some veterans who are having a difficult time. I know we'll need to make adjustments as we go, but it's time to start getting a real feel for how it's going to actually work, I think.


Not too much else.
I just got back from the Gypsy Picnic with Amy. 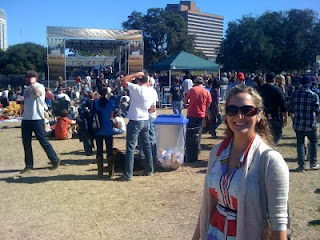 For those who don't know, Austin has been developing a sort of unusual food/restaurant scene over the past few years where some really good food is being sold out of various trailers and mobile vending vehicles around town. Menus range from gourmet doughnuts to German food to tacos, pizza, and hot dogs, but a number of these places are good enough to have developed their own little cult followings, and at least one of them has grown into a rapidly expanding business with a number of different brick and mortar locations (i.e., Torchy's Tacos, a tasty taco joint which began as a food trailer on South 1st and Bouldin).
So the idea of the Gypsy Picnic was to allow a bunch of the various food trailers from around town to all sell their food down at Auditorium Shores one Saturday (accompanied, as is the Austin tradition for most public events, by live music). I was really excited about the whole thing because it seemed to offer a chance to check out food and samples from a bunch of these trailers and to see which ones were real standouts.
The problem, as it turned out, was that everyone else in Austin also seemed to think this was a great idea. The weather was great, the people were friendly, and the food smelled good, but the place was absolutely packed and the line for each of the restaurants was a mile long. There really wasn't any way to enjoy the thing in the way that it had been advertised (as a nice, relaxed picnic affair where people could chill out, spread out on a blanket, and enjoy the music while sampling a bunch of different foods). Instead, the place was fairly crowded and in order to try out the food at any given trailer you would have to stand in line for a fairly long time (the lines may have been moving at a decent pace, but they were just soooo long).
Anyway, we left and went to eat at Sazon on South Lamar, which was really very good and not crowded at all (we were also on a bit of a schedule since Amy had a thing to go to later in the day).
I still like the idea of the Gypsy Picnic, but it was kind of a zoo, and I'm guessing that the organizers were a little taken aback by the size of the crowd who showed up (I heard at least one of the trailer operators say she was running out of food- at 3:00 when the event was supposed to last until 8:00). Next year they'll probably have a better idea of what to expect, so maybe it'll be organized a bit better. They need to find a way to cut down on those lines a bit.