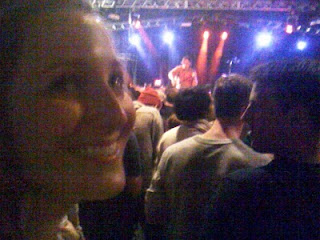 Last night Amy and I went to see Canadian rockers Wolf Parade at La Zona Rosa. Amy really hates Wolf Parade, so I had to really twist her arm to talk her into it. (Okay, not really. She actually loves Wolf Parade to an almost unhealthy degree. Which is actually really fun.)
Here's a picture from before the show of Amy with Spencer Krug in the background. Note the feverish look of excitement on one of their faces!
Anyway, Wolf Parade were really good! I had listened to their music quite a bit since Amy introduced me to them this summer, and I liked their albums a whole lot right from the get go, but their live show rocked a lot more than I was expecting. 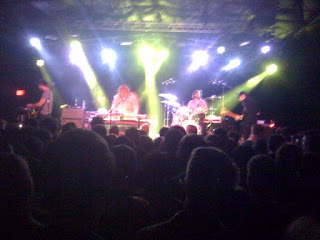 I mean, more specifically, I've liked the music ever since I heard it, but in a live setting it had an extra level of energy and intensity that I just hadn't anticipated. The keyboards, which had a cool sound, were used in particularly interesting ways and carried more force than I would have thought (including some songs where they switched to a lineup with two guitars and no bass, with keyboards holding down the bass line). The band is lucky enough to have two really strong lead singers in Spencer Krug and Dan Boeckner (each of them are talented enough to front a band on their own- and, in fact, do exactly that with separate side projects- so Wolf Parade feels like a bit of a supergroup even though I think it's actually the central project of all of the guys in it). The songs were driving and fast paced, and the crowd was really into the whole show- dancing and singing and clapping along pretty much the entire time.
Soooo- go check out Wolf Parade if you've never really listened to them. Really good band! 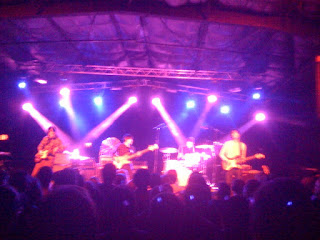 Also, as a sort of corollary, we saw a band called Ogre You Asshole as an opening act for Wolf Parade. I'm not sure that these guys are going to truly catch on here in the U.S., given that they sing pretty much exclusively in Japanese, but their music was really cool, and I liked them a lot. They had a sound which had elements of Modest Mouse, The Talking Heads, and some other stuff that I haven't quite pulled out of my head just yet.
Anyway, they were cool, and they provided a great opening act for Wolf Parade. I need to download their album.
Also, on a final closing note, I forgot how much I like La Zona Rosa. It's smaller than Stubb's, has better sound (or last night's sound was better than I remember hearing recently at Stubb's), has better lines of sight, and it has air conditioning and heat (with a roof!). Also, I just like the intimacy of a place that feels more like a club as opposed to a venue where it feels like you're standing out in some kind of random, crowded, outdoor lot (usually for a price of $35 or more). I've seen some nice shows on some nice nights at Stubb's, but I've been there for some uncomfortable, overly crowded, bad sounding nights as well.
I didn't mean to make that last bit such a downer. Really just meant to make a plea for more cool bands to come to La Zona Rosa.
Long live Wolf Parade! Thanks to Amy for turning me on to them!
Posted by J.S. at 2:54 PM