Hey! Just thought I would post a quick update.
On Friday Reed and I worked on recording some stuff (we're trying to get some new stuff together. I'm sure I'll talk abou ti more as it comes closer to fruition. If anyone cares.) The weekend was good, but went by way too fast.
I spent some time going to lunch and hanging out with my parents on Saturday (I did not, however, go to the UT/OSU game with them. I'm not sure I can handle another public execution at DKR Memorial Stadium this year).

Saturday night Amy and I went to Perla's. It was really good! The food was excellent, and I had a great time with Amy. (we tried several different things, and I liked all of it- including oysters, which I don't think Amy had eaten before) Good place, and a really nice evening.

Sunday I went to the Comic Con with Ryan. Jamie had a ticket and didn't feel like going, so I took Ryan up on it.
Comic books really aren't my thing all that much, anymore, but the convention was a good time. There were booths with people selling vintage comics, celebrities who were signing autographs (including Lindsey Wagner- The Bionic Woman, Ray Park- Darth Maul/The Toad, Ernie Hudson- Ghostbusters, Gil Gerard and Erin Gray- Buck Rogers, and Peter Mayhew- Chewbacca), and comic book artists who were selling prints and original art and stuff.
Equally fun were the comic book fans, many of whom came dressed in superhero outfits and sci if costumes. I gotta say that the whole thing is definitely nerdy, but it's hard to not be in a good mood when you're surrounded by people who are so cheerful and clearly enjoying themselves. 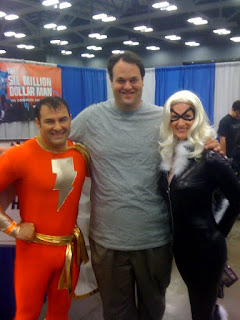 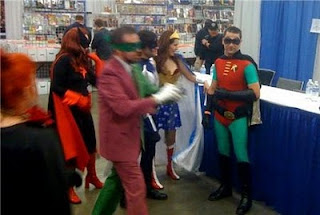 A random group of superheroes (and villains). Probably trying to decide upon a super place for lunch.


Anyway, Sunday night we had Mono Ensemble practice. To be honest, it might not have been our strongest practice ever, but, as usual, there were some really nice moments, and it felt good to be playing.