Hey!  So a lot of festive stuff has been going on.  We flew out Thursday for Phoenix to spend Christmas with Amy's family.  Our flight was uneventful.  Raylan slept the whole way.
We got to Amy's parents' house, and there was a sort of dinner party gathering planned for Carol's 75th birthday that evening.
We had tasty lasagna and pasta with bread and salad, and Jean made excellent chocolate-peanut butter pie and sugar cream pie for dessert.

To be honest, I'm not sure what we did on Friday.  Raylan didn't sleep great that first night (adjusting to a new place), so we laid low a bit.  I know that we went for for some walks, and that Heidi came to visit with the Nathan. 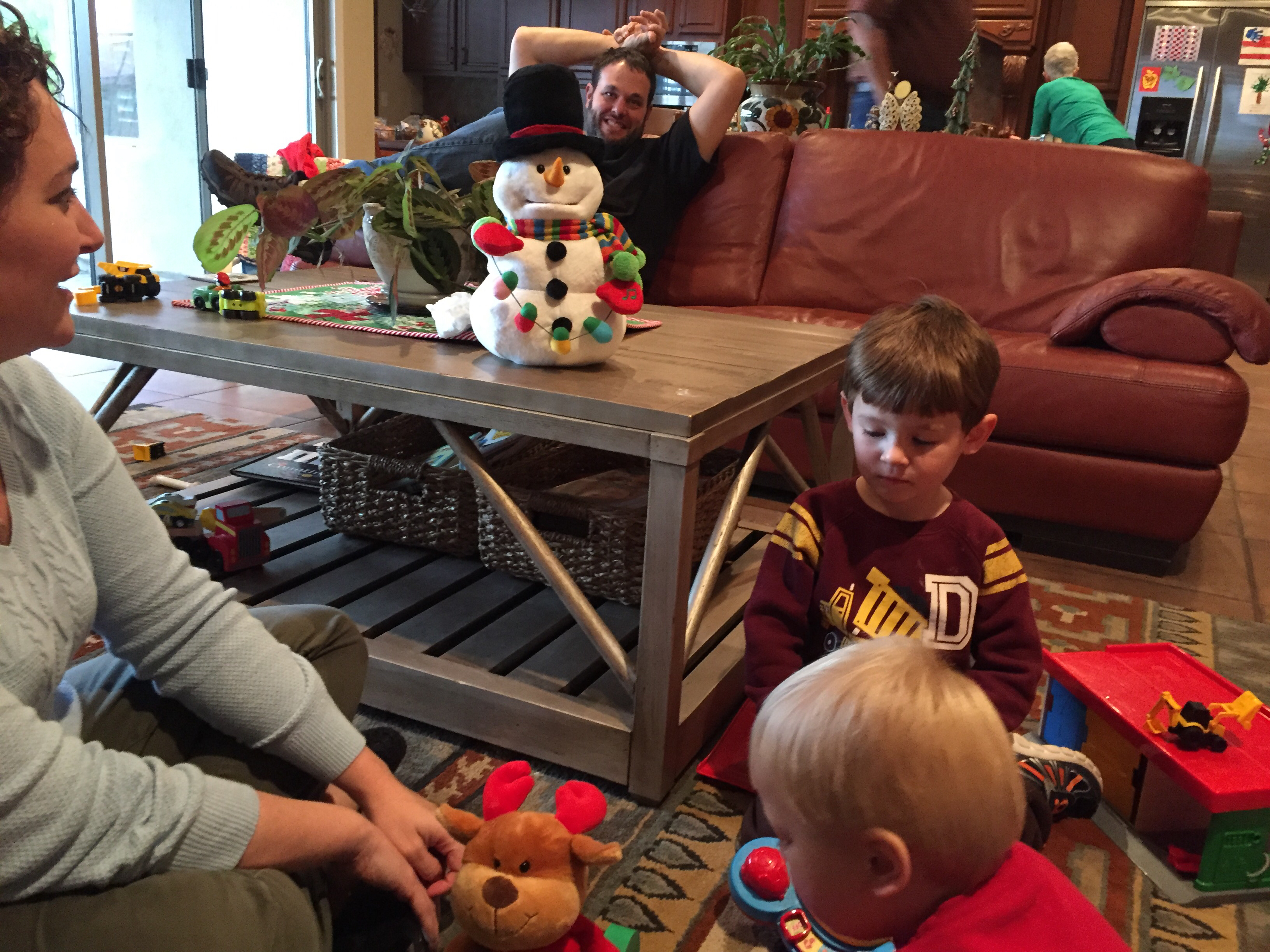 Saturday was Christmas Eve.
We got up in the morning and went with Jean to take Raylan to Sun City to see some trains and some fountains.  The Sun City residents had set up some miniature train stuff for Christmas.  Rylan was equally excited to just run around the grounds near their activity center, checking out the fountains and visiting the dog park and whatnot.

It rained pretty hard on Saturday, and the weather was kind of cool.
Weird.
I've been to Phoenix a number of times before, but I've never seen it rain like it did on this trip.  It was kind of cool to watch the dark clouds roll in over the mountains and into the dessert in The Valley.

We went to Lord of Life Lutheran Church for Christmas Eve.  It was a nice church.  Unfortunately, Raylan only lasted through the first song before he started sort of squirming and loudly protesting about not being allowed to run around the church.  First I tried to quiet him down.  Then I took him to the narthex.  Then I finally had to leave the whole building and go to a fellowship hall on the other side of the court yard because he was yelling so loudly by that point that the noise was going to carry into the sanctuary and disrupt the service.
Oh well.  We tried!

Anyway, we ultimately ended up leaving early, taking the car and heading home, with Jean and Greg kindly offering to catch a ride home with Jerry and Carol. 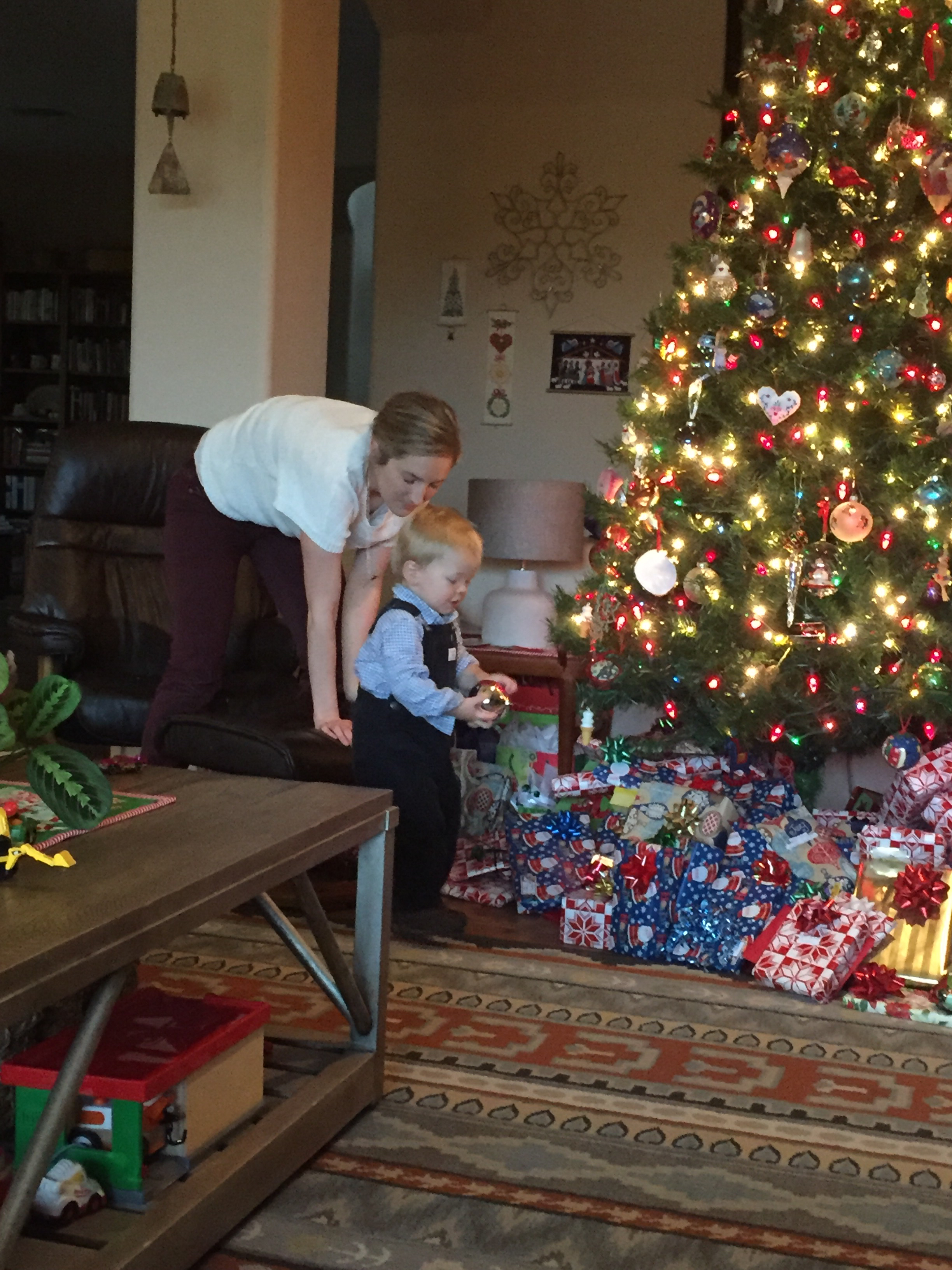 We got back from church and later that evening we just hung out.  Greg put together some kid-sized vehicles that were Christmas presents for Joanna, Nathan, and Scott.

On Christmas morning we had a nice breakfast.  Jean made egg casserole and Heidi brought hash browns over.  We had cinnamon rolls and fruit and other stuff, too.
The kids opened presents.  This was the first year where Raylan started to really "get" Christmas, so he was excited to open gifts and get presents out of a stocking.  It was all very nice.
The only moment of drama came when we found out that Scott hadn't been feeling well when he got up.  There was some initial concern that he might not make it, but Matt brought him over just a little while later when he was feeling better.  We were all really happy that worked out and that he didn't get genuinely ill on Christmas. 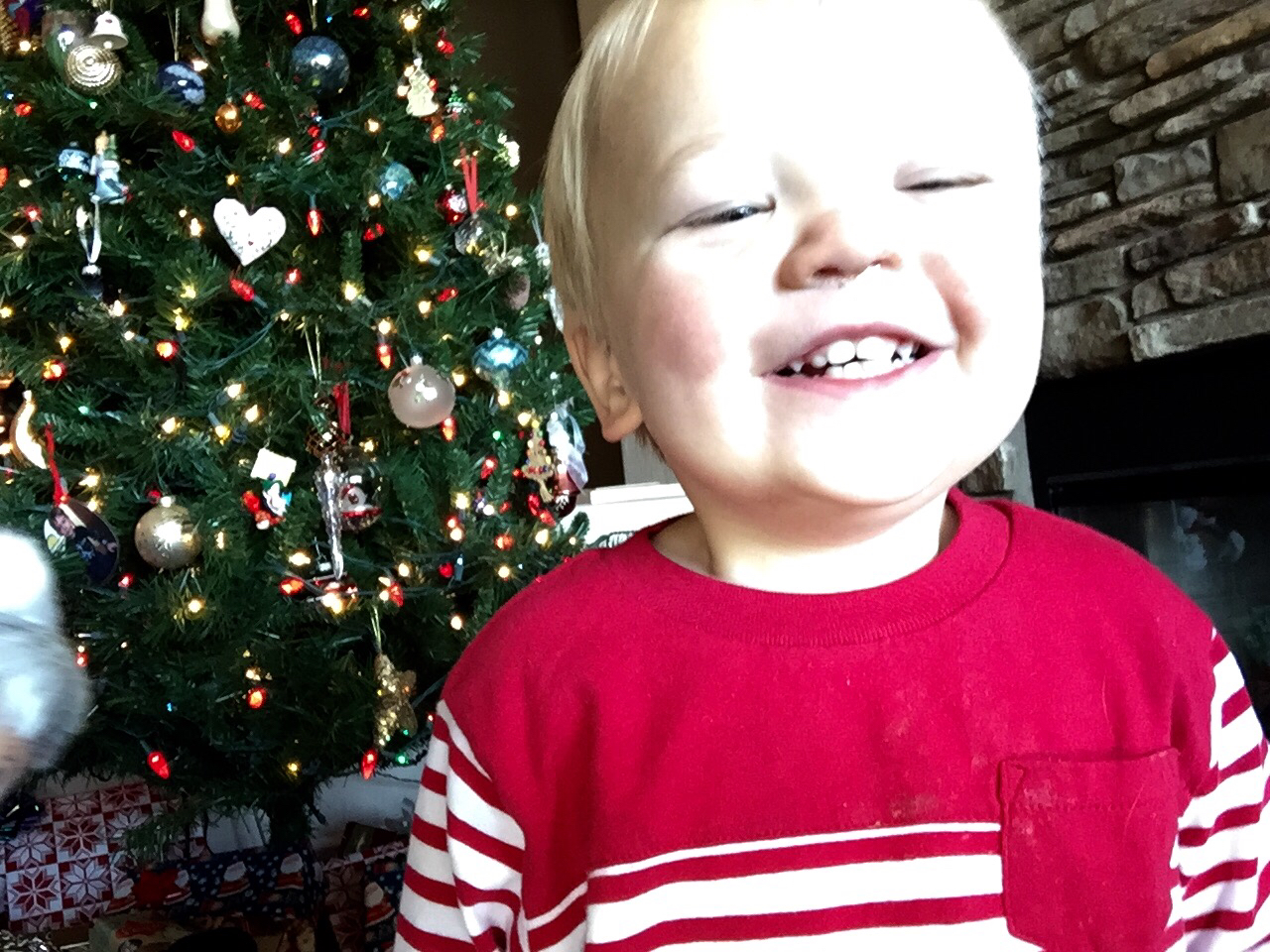 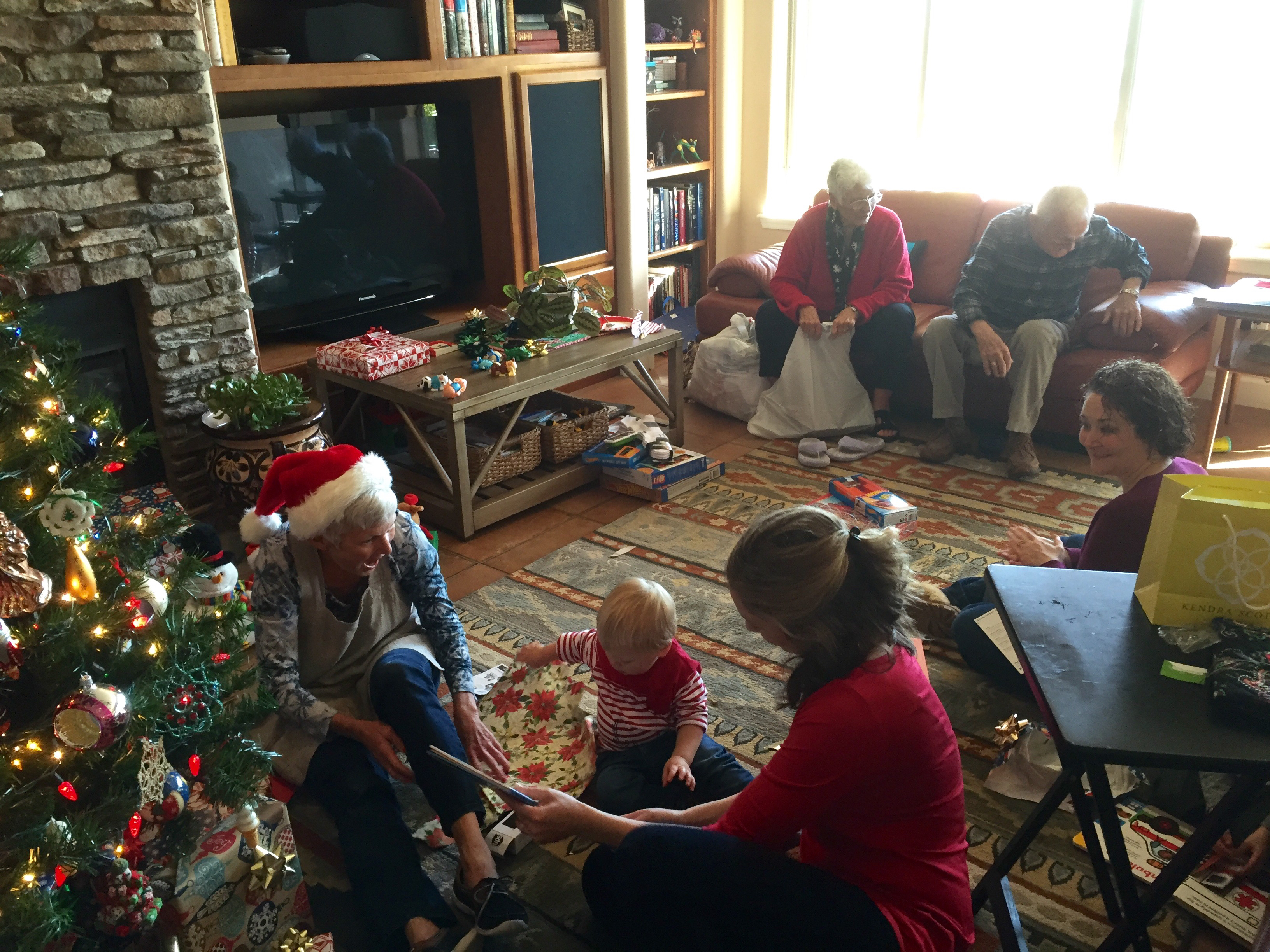 Later everyone went to their separate houses for a nap.  Raylan recharged so that he could be faster and louder later.
The family reconvened in the late afternoon, early evening for a dinner with smoked turkey, artichoke and crab dip, cheese and crackers, and assorted other treats.  Heidi made little sandwiches of turkey, roast beef, and, I believe, ham.  The food was all excellent.  Greg had some good beers, and we drank a few of those as well.  The kids ran around like whirling dervishes, both inside the house and in the back yard, having a lot of fun and, basically, wearing themselves out.

On Monday we took Nathan and Raylan to the Wildlife World Zoo.  It was a lot of fun.  Wildlife World Zoo is a private zoo, so I was expecting something on the scale of the Austin Zoo, but, it was a much larger, more extensive park, equivalent to or surpassing many of the city zoos that I've visited.
We had a really nice time.  The weather was great, and I think both the kids and the adults really enjoyed it.

On Tuesday we took Raylan to Anthem to play at the park and ride the train.  The train went through a tunnel that was decorated with Christmas lights.   He loved it.
Once again, the weather was beautiful.
Tuesday afternoon I snuck out to do some shopping with Amy.  Jean and Carol got me some shirts, belts, and socks at Destination XL, and they also got some gift certificates that came with them (thanks so much Jean and Carol!).  So, in the end, I not only got nice clothes as a gift, but I got to do some really good, significantly discounted shopping as well.
On the way home Amy and I stopped and picked up some pizzas for us for dinner.

On Tuesday we also went to see Rogue One with Amy, Greg, and Heidi.  I think we all liked it.  Well, I'm not sure if Heidi liked it, but she was a good sport and didn't complain about it, and the rest of us liked it.
We saw Rogue One on the same day that Carrie Fisher died.  It was kind of weird (spoiler) to see her appear in computer generated form (albeit a younger version of herself) on the day that she died.  Presumably they got permission from her to put her likeness in the moviegoing before she passed, but, not knowing she was in the film, it was still quite a shock to see her appear on screen in the final shot.  In truth, it was pretty distracting.  (and that's not even taking up the issue of Peter Cushing's Grand Moff Tarkin, a character who appears fairly extensively in the movie through the use of computer imaging, although Cushing himself died in 1994).
Anyway, those are side issues, and I liked the movie.  Thanks to Greg for buying the tickets and to Jean and Carol for watching Raylan.

And that was pretty much our trip.  There were plenty of other conversations, walks, and trips to the playground in there.
It was a nice visit and a good chance for everyone to catch up.
Thanks again to Jean and Greg for being such great hosts and to the Jerry, Carol,  and the Sinex family for being so welcoming and gracious.

We flew out on Wednesday.  We got home feeling a little worn out, but happy.

Mom and Dads picked us up at the airport, and we went home and crashed.

We had a few more days until New Year's, and we spent them getting chores done, unpacking, and generally settling back in.

Our New Year's Eve was pretty low key.  Mom and Dad took Raylan on Friday night after we stopped off and visited with them for a while.  That night we went out for a pleasant, quiet dinner at Chinatown in Westlake the night before the crowds got crazy.

On Saturday night, New Year's Eve, Amy made chicken enchiladas, we drank a couple of glasses of wine, and we all went to bed before midnight.  There were fireworks in the neighborhood, and I watched a bit of Kathy Griffith and Anderson Cooper on CNN, but other from that, it was a pretty low key night.

New Year's Day was really nice and sunny and warm.  We took down Christmas stuff, did some yard work, and went over to Mandy's house in the afternoon for a New Year's Day celebration.
Andy, Rami, Wilson, Kellie, Josephine, Goldie, Donna Rene, Kim, and Mandy were there in addition to ourselves.

And that was pretty much it!
We had a nice set of holidays.  Thanks to our families for being so supportive and helpful.
We love you guys, and we couldn't do it without you!