Hi!  I hope everyone had a good weekend!
Ours was pretty good.
Last Thursday we got to go see a play!  Mom and Dad took Raylan for the night, and we went to see Let the Right One In.  It was fun!
Let the Right One In was a play about a young boy and his first childhood romance- with a young girl who turns out to be a vampire.  The play was put on by the Nation Theatre of Scotland.  It was based upon the movie of the same name.  It was good.  Scary and poignant and sometimes funny.
We enjoyed it.
We also went out to dinner before the show with Shelly and Kit at the Salty Sow.  It was a good restaurant.  We had a really good time.  Nice evening.

Mom and Dad took Raylan overnight on Thursday and had him on Friday as well.  Predictably, it seemed like he had a good time.  He got to go to the aquarium, which apparently he really enjoyed.

On Saturday we got up and I took Raylan with me to the grocery store so Amy could get some stuff done for work.
After our trip to the store, I rode my bike downtown to check out the Women's March.  Amy was a little wary about bringing Raylan to it and a little wary about finding parking downtown on her own, so, perhaps slightly strangely, in the end I represented our family while Amy stayed home with kiddo.
I had heard a bunch of women at work and in our neighborhood talking about going to the march, and these weren't necessarily the kind of people who show up to protests and marches at the drop of a hat, so I felt like something potentially unusual might be in the making.
And it was.  The march was huge.
I've previously shown up for a number of protests and events downtown (against the Iraq War, supporting Wendy Davis, anti-Trump, for tighter gun control, etc.), but this was by far the biggest political protest event that I've seen in Austin.  The newspaper put the numbers at 50,000, but I honestly would be surprised if there weren't even more people than that (I kept trying to compare the crowd size to the 100,000 people I've seen at DKR stadium for UT football games, and I would have put the march crowd at closer to 3/4 or 4/5 of the stadium than 1/2).
Anyway, it was a lot of people, and they were loud and enthusiastic.
People weren't just anti-Trump (although that was certainly a theme).  They were also simply for women's rights, for human rights, for equal pay, for women's health care, and in favor of leadership which respects and understands their interests.
I know that it's easy to dismiss protests and marches, saying that they don't effect real change, and while it's true that no one is going to pass a bill or create a law simply on the basis of a march, I do tend to think that protests and marches inspire people and generate a lot of energy.  The trick is to harness that energy, refocus it, and redirect it into something that creates concrete results.  I believe this can happen. We've seen this happen.  We have a memorial to M.L.K. in Washington, D.C., which stands as a testament to the power of a leader who never held a political office or a military rank.
Laws were passed and political leaders ultimately were compelled to comply with a mandate that he helped to create through moral leadership of the citizenry.
Sometimes political will precedes official action.  Sometimes it precipitates it.
Would I have rather seen this sort of energy before the election?  Sure.  But honestly, I think a lot of people never took Trump seriously enough to realize what he represented.  His election might end up as a wake up call for progressives.  This is by no means a sure thing.  But it's definitely possible.
As I've told a number of people- Trump, himself, wasn't actually the shocking thing about this election.  What came as a shock was the fact that there were enough people in this country who were willing to vote for the man to put him into office.  I think a lot of progressives sleepwalked their way through the election believing that there was no way that someone with the character and disposition of Trump could ever get voted into the presidency.
The real slap in the face came from finding out that the nation was willing to elect a guy who had run a reprehensible campaign and who had been engaging in extremely shady business practices and personal conduct for decades. (And I don't think is necessarily even a partisan position- many notable conservatives also refused to endorse Trump).  Many people never imagined that a Trump win was possible prior to the election.
Well we know better now, and, sadly, we know our country a little better now.
Hopefully this realization will generate action.

Anyway, time will tell whether the Women's March was a moment or a movement, but it was definitely something to see. 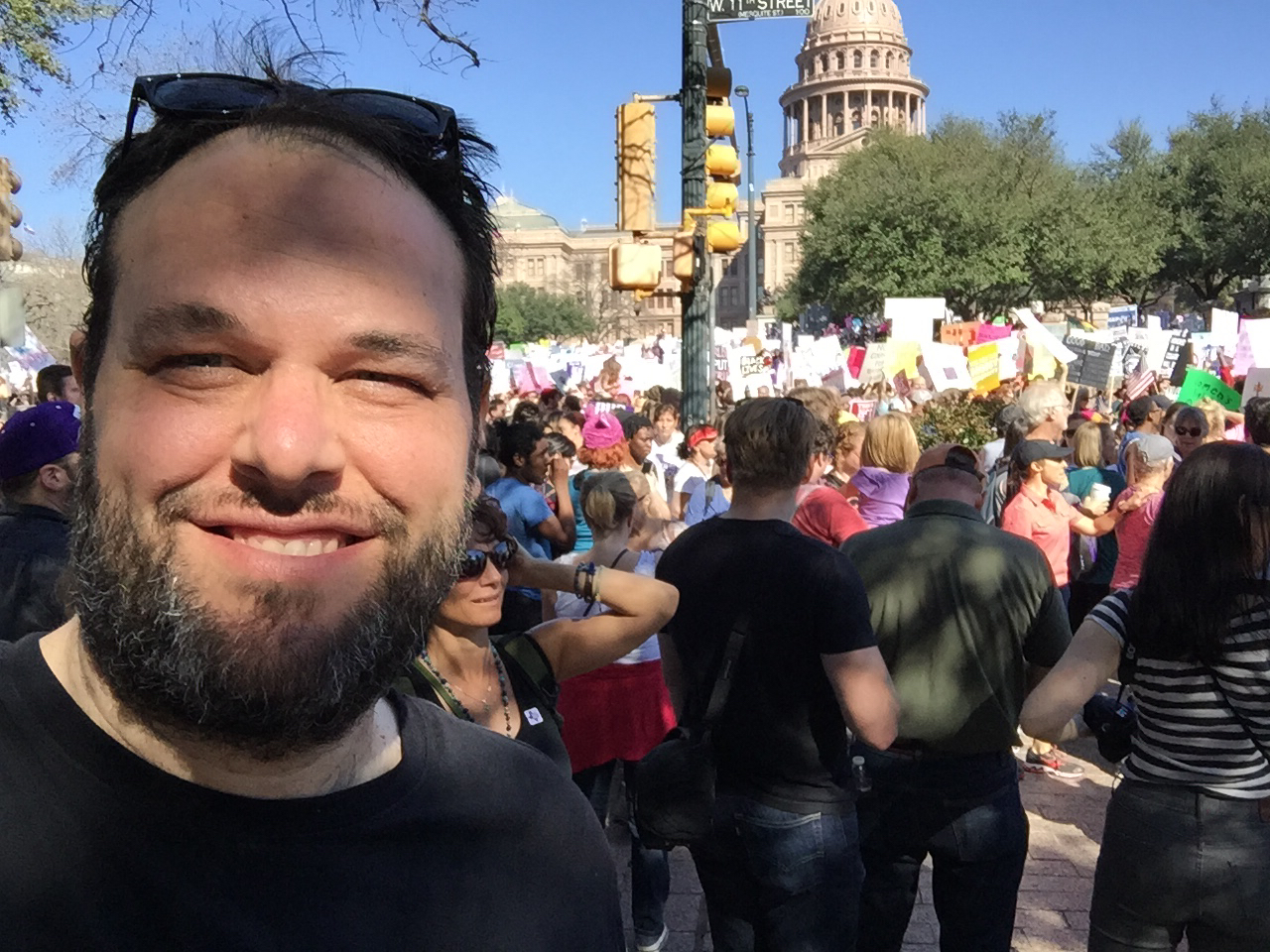 On Saturday afternoon we took Raylan over to Doc's.  He played on the playground and ran around and generally had a good time.  The place, especially the playground, was packed with kids.  At one point Raylan got away from Amy and me and went running off between some big kids who were on the swings.
Some lady ended up dramatically diving to the ground to try to stop him.
I was a little mortified, but scooped up Raylan and thanked her.
Deciding at this point that the playground was a little overcrowded and crazy, we fled!

On Saturday night I think we took it easy.  Amy made some really good pasta with sausage.

On Sunday we got up and went out for Mexican breakfast at La Posada.
Afterwards, I installed a curtain rod for out new sliding door, and Amy hung up some curtains.
Amy put Raylan in the jog stroller and went jogging for 4 miles. (Ironwoman!)
I went to the gym.
Raylan took a nap sort of late.  We played outside a bit.

Later I went to Reed's house for band practice.  It was just the two of us, but we had a good time. Reed's birthday was Friday, so it was good to get a chance to hang out with him a bit and do some rocking.

And that was it!  That was the weekend!
It was good.  It went by way too fast.

Hope everyone has a good week.