Hey! So, our weekend was pretty good!
We intended to go to the zoo this weekend, but there was a constant chance of rain, so we chickened out.  We adapted, though, and still had a nice time.
Friday night Amy made salmon with avocado puree.  It was very good.
On Saturday we all went to the grocery store together.  Raylan also got his first haircut on Saturday morning!
We went to the Great Clips by our house.  Raylan was excited about the whole process at first... 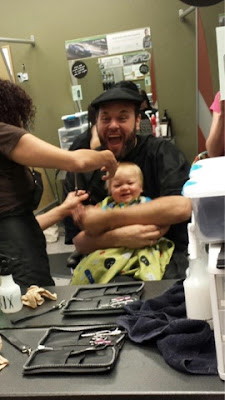 Later it sort of went downhill.  He decided he didn't like the scissors and people grabbing at his head, and he started flailing his arms and trying to push the scissors away from him.
He'd already been sort of cleaned up, though, and the stylist recommended that we come back and give it another go at a later time when he was more calmed down.  Better to have a slightly imperfect haircut than traumatize the kid (don't wanna make him dread getting his hair cut) and risk having him poked or cut while wiggling around.
After our early morning haircut and (we arrived right when it opened) and a little playtime... 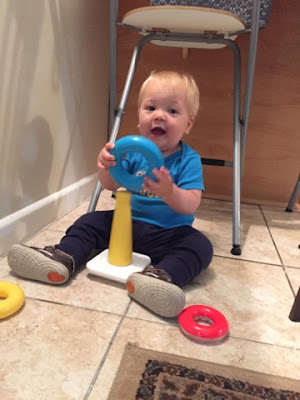 ... we went over to Strange Brew to meet up with Katerina and Logan and Mary, Chad, and Truett for the Saturday morning kid's music series.  The Groundwork Music Orchestra was playing.  They were fun.  There were songs about giraffes, elephants, soup, etc.
Raylan seemed to enjoy it, but he pooped out pretty fast.  He had already had a long and busy morning, so Amy noticed him robbing his eyes and yawning.  We left halfway through, and he fell asleep in the car on the way home.  We had a fun time while it lasted, though.


So after our busy morning, we had a more laid back afternoon.  We took a walk, briefly visited our neighborhood park, and did some chores.  Amy and I both got to exercise.
Saturday night Amy made quinoa enchilada casserole.  It was good!  I hope she makes it again.
I think we watched The Flash.  I think.
On Sunday we went out to breakfast at Magnolia Café.  Then we went to Target.  Later we went to Garrison Park.  We wheeled Raylan around in his stroller and he got to ride in the bucket swings for a while.  There were lots of families having picnics and birthday parties in the park.  It was good to see so much activity going on there.
I ran another errand (Home Depot!) with Raylan.  Then I went to band practice.  Frank, Jim, Reed, and I were in attendance.  It was fun, and we sounded pretty good.
I came home, and Amy had made some tasty Moroccan chicken.  I enjoyed it.
That was about it.
We did some reading and went to bed.

Here's a picture of Raylan headed into school on Monday morning with a big smile on his face, inspiring his dad to face the work week without trepidation.

So that was pretty much it!  Mom and Dad have been in Nashville this weekend visiting the Bloods.  Hope they had a good time!


And I hope the upcoming week has some fun it for everybody!
Take care!
Posted by J.S. at 12:30 PM