Hello! Hope everyone had a good weekend.  Ours was low key, and pretty good.
Raylan turned 7 months old on Friday!  I can't believe it.  The passage of time has been a strange sensation since Raylan was born.  In some ways it feels like he's been around for a lot longer than 7 months.  It seems hard to believe that we've only had the little guy in our life for just over a half year.  On the other hand, it seems impossible how much he's already grown and changed and developed.  He's very vocal now and extremely alert.  He says things like , "Mumma... Mumma..." (maybe in relation to Amy, or maybe just because it's fun to say, and we keep repeating it to him- probably a combination of both).  He really enjoys having books read to him.  He looks at the pictures, grabs at the pages, and gets excited (arms flapping and bouncing) for certain books. He also just started to do some forward scooting this weekend.  He's been able to turn and roll for a while now, but this weekend he started doing a sort of soldier crawl where he pulls himself forward with his arms.  We have some babyproofing in our near future...
Anyway, in short, by now it seems sort of hard to imagine life without Raylan, but it also seems like he's growing up in a flash.
He's an amazing little kid.  We love him.  He loves us.


So we took some 7 month shots this weekend. 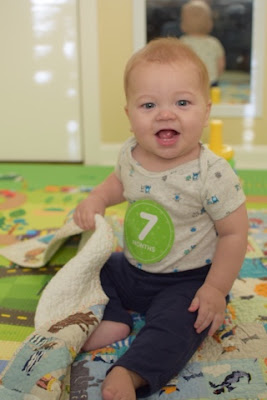 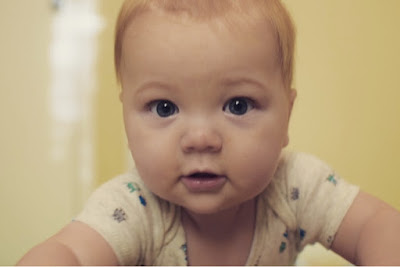 On Friday night I think we sort of just hung out.  Amy made a good vegetarian dinner that had orzo and assorted veggies in it.  I enjoyed it.
I think on Friday night we also watched the first episode of The Man in the High Castle, streaming it from Amazon Prime.

The Man in the High Castle series is loosely based on the Philip K. Dick book of the same name, which I had just finished reading last week.  The show takes place in the early 1960s, and it's an alternate history fiction in which the Nazis have won World War II and divided the United States into both Japanese (in the West) and German (East) territories.
The novel is a little stranger than the show, with most of the characters sort of accepting the current, depressing state of their country and the world as more or less immutable fact.  they sort of make the best of things and do the best that they can in living out their lives.  Events ultimately take place in the book which offer the promise of potential change, but this possibility is only a sort of glimmer of potential hope.
The series, on the other hand, seems to suppose the fact that an Axis occupation of the United States would be met with an underground, armed resistance from the get-go.  To be sure, the television series is dark in its depiction of occupied, Axis North America, but I actually found the book a little more chilling in its portrayal of a world in which Americans have become resigned to living under a government which oppresses freedom, regularly engages in genocide, and allows for the utilization of slaves.  The instinctive belief that Americans would, if faced with Axis occupation, undoubtedly leap into action despite great personal risk creates a definite sense of drama and danger, but it's actually a much more optimistic viewpoint than the more staid depiction of more humdrum America where people would rather put up with tyrannical, insane rulers so long as, in their personal lives, they are mostly allowed to go on with the ins and outs of their regular day-to-day routine.  The differences between the show and the book are interesting, and although they might initially seem subtle, I think they ultimately present very different views of American nature.  The show presumes that we won't tolerate injustice and will fight for liberty at any cost.  The book assumes that, once subjugated and acclimated to a new system, Americans will tolerate terrible injustices, at least insofar as they aren't suffering too terribly on a personal level.
Anyway, we're only a couple of episodes into the series, but I'm liking it.

On Saturday we got up really early and went to breakfast with Raylan.  I'm here to report that if you want a good table at Kerbey Lane on a weekend, getting there at 7:00 a.m. will really cut down on your wait time.
We had a nice breakfast, and then I did some grocery shopping.  During the morning, a cold front rolled in and the weather cooled off.  The sun came out, and it was breezy.  We went for some walks, and I took Raylan with me to Target while Amy went to the gym.  I went to the gym after I got back.
Saturday night Amy made tortilla soup and we watched another episode of TMITHC.  Soooo good.

On Sunday we mostly relaxed.  Took care of some chores.  Played with Raylan a lot.  We each went to the gym.  We once again took several walks.  I had band practice with Reed and Frank in the evening.  It was good to get together with them and make some music.  It had been a few weeks.

So, overall it was a pretty quiet weekend.  Nice, though.
Hope everyone is having a good one.
Turkey Day is right around the corner!﻿