Well, the weather in Austin this weekend was kind of lame.  It was rainy and cold.  On the other hand, we have such nice weather so much of the time that I feel pretty lame complaining about the weather.  We've just had a run of clouds, rain, and dreariness lately, and I'm a sunshine sort of guy.
Anyway, life, nonetheless, is pretty good!
On Friday the folks up at my office threw a baby shower for Amy and I.  It was really nice.  there were snacks and cupcakes, and they gave us lots of cool baby stuff.  It was nice.  I'm really fortunate to have such nice, cool people for co-workers and friends. 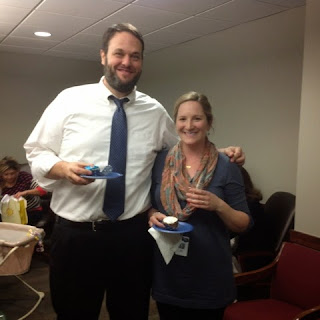 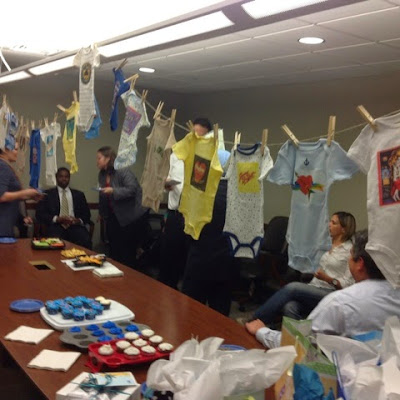 So the work shower was cool! Friday night we ate pizza and went to bed early. We were both pretty tired.


Saturday we ran some errands. We did some shopping, organized some stuff, ran errands and tried to run errands (apparently a lot of people buy discount tires on Saturday), hung some more stuff in the nursery, etc.  Saturday night we listened to a couple of episodes of Serial.  I like it, but Amy is really hooked.  I'm a little surprised.  She's normally not a "true crime" sort of gal (or I didn't think that she was), but she says she likes the narration, and she says that listening to it as a story is a lot easier than it would be to watch a TV show that might have crime scene photos and whatnot.
On Sunday we ran a few more errands.  Amy printed out a bunch of the pictures from the photo album on our computer.  I got started on thank you cards.  In the evening I had band practice.  Well, it was actually Wastewood practice, with just Reed and I.  It felt good to play.  I had bought a tiny little PA system at Guitar Center, so we got to try that out for the vocals, and it seemed to work well.
I came home, and Amy had made a really good dish that had chicken and peppers and rice.  Yum!
We ate and listened to Serial.  I watched an episode of Walking Dead, and then went to sleep.
The weekend!