Still not really feeling the blogging, but it's been a while, so I feel the need to write something.

There's a good article today in The New York Times about the International Whaling Commission and about how the commission narrowly avoided a repeal of its 24 year ban on commercial whaling last week. 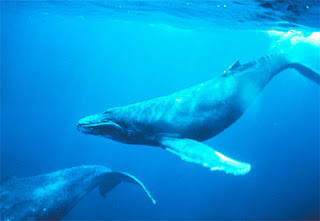 The article discusses new research that has continued to confirm the extremely intelligent and socially complex nature of various whale and dolphin species, and it has a little bit about the international politics that impact commercial whaling (e.g., Japan and Norway have been violating the whaling ban for years, claiming that they engage in whaling practices for scientific research purposes while nonetheless selling the harvested whale meat).
Anyway, I love animals, and I love whales and dolphins. I just can't imagine wanting to kill something that's so smart and graceful and cool.
I went to an animal rights conference last year which was attended by, among others, some lawyers who work with Green Peace and The Sea Shepherds (both are conservation groups), and they discussed the need for international global cooperation in order to preserve whale and dolphin populations across the planet. From a legal standpoint, the work to protect whales involves a lot of work with treaties and international law and a whole lot of lobbying of various governments. It sounded like interesting work, and these guys seemed extremely enthusiastic and dedicated. They also said that they typically earned salaries that would make a first year teacher look really wealthy.
I've heard arguments that more whales might have actually been saved if the whaling commission had allowed quotas on commercial whaling, but tightened up some of these "scientific research" loopholes. I just can't help feeling that that would be a move in the wrong direction. Personally, I don't want to see the rules on whaling restructured. I want to see whaling abolished entirely.
Well, that's it. Make a donation to Greenpeace or The World Wildlife Fund or The Animal Welfare Institute.
Posted by J.S. at 9:57 AM