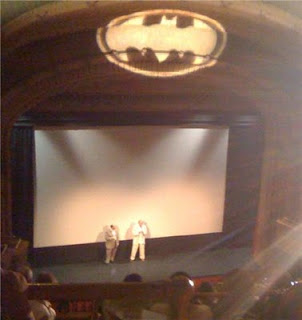 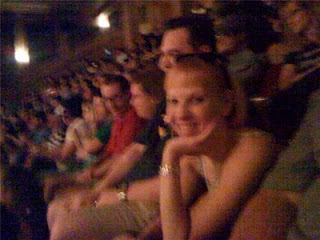 Well, it was a decent weekend. Went over to Matt and Nicole's house for Matt's birthday celebration, which was a good time. Sunday I went to a screening of the old Batman movie from 1966 at the Paramount(along with Ryan and Jamie and Julia and Bill). The screening featured a replica of the old Batmobile (driven by Batman and Robin, of course), a bunch of live bats that had been brought in by a bat conservation group, and an appearance by Adam West, the original Batman from the 60's TV series (in the picture up above, that's Adam West there on the right in the light colored linen suit). In addition to just being a really good time, the whole thing just had a lot of personal significance to me because the old Batman TV show was one of the first television programs that I ever remember watching and really loving. Batman was on in syndication when I was a little kid, and I used to watch it religiously. In fact, Mom used to plunk down my little baby brother next to me while I watched the show, and one of the first words that Ryan ever learned to say was the word "Batman", which he blurted out along with me as I sang along with the show's theme song (it's a good theme song for little kids, given the fact that it really only has one word).
So, even though there were lots of little kids in the theater who were parroting back the actor's lines and talking at the screen throughout the movie (in his excitement, the little kid sitting behind me actually started climbing up over my shoulder at one point), yesterday's Batman screening was definitely one of those occasions when I was pretty happy to be watching a movie with a bunch of kiddos. It was a really good thing. I hope some of those kids grow up to have some of the same fondness for that original Batman series that I've always felt. Given all of the darkness and violence that fills so many modern superhero movies, it was refreshing to go back to a superhero story that was clearly meant to be taken more lightly and with a sense of humor.
As Adam West, himself, said (paraphrasing), "Today's Batman is all about the Dark Knight. I was, and am happy to be, the Bright Knight!"
West clearly really enjoyed talking to the crowd and was appreciative of a fanbase that packed a large theater on a hot summer afternoon just for the chance to see him and and a movie that he starred in 44 years ago. And we were more than happy to have him in attendance.
Also, there was an interesting article in the Austin Chronicle from last week about the troubled state of the mental health care system here in Travis County. Given the lack of hospital space for the mentally ill here in Travis County and the fact that many of these people ultimately end up in our jail, the topics discussed in the article have a pretty direct bearing on the day to day work that I do as a mental health prosecutor. I would probably write a whole lot more about this whole topic if I hadn't just talked everyone's ear off on the subject last week while discussing the overall population of mentally ill people in jails and prisons across the U.S..
Well, that's all I have for today. I encourage everyone to read that Chronicle article and to support increased services for the mentally ill here in Austin.
Posted by J.S. at 9:50 AM