Howdy. Well, I didn't do much last night. Got home, boxed up my ailing home computer to send it in to Dell for repairs (finally reached this step after spending a couple of pointless hours on the phone talking to Dell customer service reps in India- Dell customer service sucks, people, and we're probably creating a whole generation of Indian people who hate Americans because their only interaction with them occurs as a result of frustrating customer service calls), got some exercise on my ol' eliptical machine, took Cassidy for a short walk/hop, and went across the street for some Mexican food leftovers from Mandy's party this weekend (delicious- Mandy's overpreparation of mountains of Mexican food has turned out to be a really good thing for me). Anyway, after eating with Mandy and Kellie I returned home, planning on watching some television, but I fell asleep on the futon and woke up sometime closer to midnight and wandered off to bed. Not exactly an exciting evening, but a pleasant one.

Even though I didn't play it last night, I got a pretty cool new (at least new to me) videogame this weekend called Assassin's Creed. The game has a plotline in which you're actually supposed to be a guy named Desmond Miles at some point in the near future, but Desmond is taking part in some sort of study/experiment in which the "genetic memories" of his ancestors are being explored. One of Desmond's ancestors is named Altair, a member of the Assassin Brotherhood, a Muslim sect known for the killing of Sunni leaders and the leaders of other groups which oppressed them, in the Middle Eastern Holy Lands around 1191. 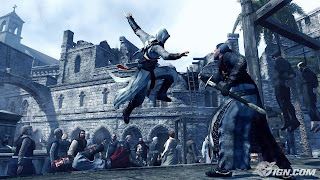 The action in the game takes place as you try to carry out the assassinations of a number of men who are said to be exploiting and exacerbating the conflicts occurring during the 3rd Crusade for their own profit (you are sent on these missions by the leader of the assassin's guild). The game takes place in the cities of Jerusalem, Damascus, Acre, and Masyaf, and the depictions of the towns and the surrounding countryside are extremely vivid and well-constructed (the game designers claim that the layouts of the towns are historically accurate, but I would guess that this is pretty much impossible to verify).

Anyway, it's a cool game. Your little dude is good at everything from slipping through crowds, to running and jumping across rooftops, riding horses, pickpocketing and eavesdropping, and, of course, killing people in a number of ways (some stealthy, and some extremely unstealthy, but spectacular to witness). I like the historical context of the game, and the attention to detail. The graphics are pretty incredible, and it's easy to get immersed in it. Despite a disclaimer at the beginning of the game stating that it was created by a multi-ethnic, religiously diverse team, the game is also a sort of disconcerting and not-so-subtle reminder of exactly how long there have been violent troubles existing between Christians and Muslims, both in the Middle East and in the rest of the world (I mean, the game isn't exactly historically accurate, but it does incorporate actual events that occurred in the Holy Land toward the end of the Third Crusade).
Anyway, it's a pretty cool game, although probably not one to share with the young kids at home.