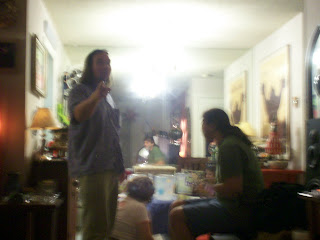 So here are some pics from the weekend thus far. These first couple are from the Friday the 13th jamboree over at Eric and Stephanie's place. Before the night was over we had about 4 acoustic guitars, a bass guitar, and a small drum set going in their apartment (we had the lights turned down during the rocking, and I was playing guitar, so I guess I got no pictures of us actually playing). The tomfoolery went on until well after one in the morning, and unbelievably, none of their neighbors called the police. I'd say Eric's luck holds out just fine on these Friday the 13th events.

In the picture above, Reed is pointing at me and mumbling something incoherently about having his picture taken. 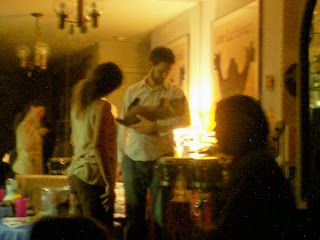 In this pic Eric is making sure that the cats are also having a good time at the party while Anna looks on. 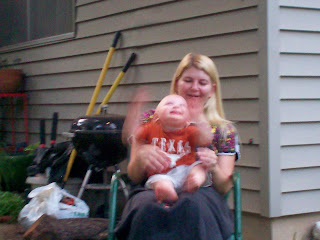 On Saturday Mandy's brother and sister-in-law, Justin and Charissa, were in town with Mandy's nephew, Lucas. Mandy had some of us over for a barbecue, and Lucas was sort of the guest of honor. Lucas can be seen in this photo, expressing to the world how excited he is to be at the cook out. Maybe a better name for this picture would have been "Lucas Takes Flight". 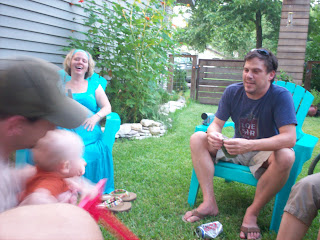 In this pic, Andy gives Lucas instruction on how to properly destroy things (apparently to Kim's amusement). 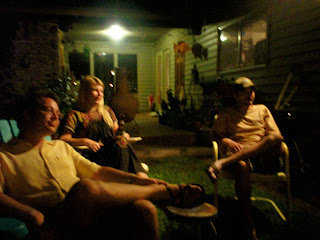 After Lucas went to sleep we ate a ton of barbecue and drank some beers and did our traditional hang out in Mandy's backyard.

And the weekend's not over yet, but I'm a sucker for posting pictures. Hope you Adventurers are having a good weekend, as well.