Hi!  We just got back from a family vacation to South Padre.  We had a really nice time.
It was a nice, relaxed trip.  South Padre is relatively quiet during the off season.
Raylan did really well on the drive down (he watched shows and played games on his tablet, mostly).
The beaches were nice, and not crowded at all.
We stayed at the Bridgeport Condominiums, and our place worked great.

We got to South Padre on Thursday.  We hit the beach that afternoon after arriving.

On Friday we spent the morning at the beach as well.


In the afternoon, after lunch and nap, I took Raylan to the pool while Amy worked out.  We had a lot of fun swimming.
Friday night we went out to dinner at Blackbeard's, a seafood place.  Dinner was good.
On Saturday we ate breakfast at Manuel's in Port Isabel.  Good breakfast tacos.  Afterward, we once again spent the morning at the beach.  The weather was nice.


After the beach we went to Sea Turtle, Inc., which is a sea turtle rescue center on South Padre.

It rained a bit on Saturday afternoon.  The rain mostly fell while Raylan was napping, and was also fortuitously timed to give me a chance to watch some of the UT-TCU game (we won!  we won!!).
We went to dinner at Gabriella's, a pretty good Italian place near our condo.
After dinner we did some swimming pool swimming.  The sun set while we were at the pool.  It was nice.  The Bridgeport has a nice pool, including a kid pool and a hot tub.
The next day we got up, piled in the car, and went home!
Rylan seemed to really like the beach.  He liked playing in the waves, collecting shells, and building sand castles. 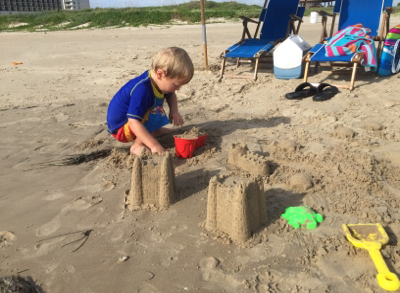 We had a really good trip.  It was great to have a chance to get away from everything and enjoy some family time together.