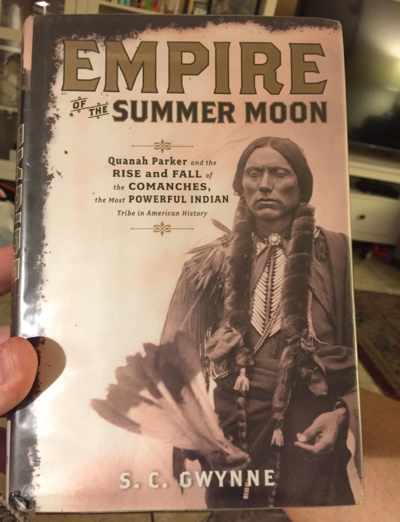 So I just finished reading Empire of the Summer Moon:  Quanah Parker and the Rise and Fall of the Comanches, the Most Powerful Indian Tribe in American History.  The book was written by S.C. Gwynne.
The book was well written.  Like a few other books on American history that I've read lately, it was entertaining and engaging in addition to laying out a fairly well-informed, well-researched depiction of its subject matter.
Gwynne not only breathes a lot of life into the Parker family, Quanah Parker, Ranald S. Mackenzie, and some of the other characters in the book, but he paints a vivid picture of life on the American frontier during the 1800s.
I picked up the book because I've become more interested in recent years about the life of white settlers in Texas and the central part of the country during the 1800s.  I guess it's a general curiosity about what life was actually like during that time- about how real life compared to movie depictions and written, fictional accounts of the American "old west."
Gwynne's book tends to reinforce the notion that, at least when it came to conflicts between the Northern American Indian tribes and white settlers, things tended to be extremely violent and ugly.
Gwynne, like most historians, points out the dishonesty, greed, and utter foolishness of many of the white settlers who initially tried to move into Comancheria.  Any attempts to try to negotiate a peace agreement or treaty between either the government and the Comanches (or other tribes) were violated almost immediately by white settlers who moved onto Indian lands to try to establish homesteads.  White settlers simply didn't see Native Americans as genuine persons, worthy of possessing property rights, territorial sovereignty, and the minimum level of mutual respect that would be accorded other white people.
On the other hand, Gwynne does not downplay the brutal, savage attacks by the Comanches.  In addition to being extremely skilled horsemen and warriors with a longstanding culture valuing fighting over most all other skills, the Comanches were a merciless, sadistic foe.  Torturing captured enemies to death was the norm.  The rape of women and the murder of children were common.  It can be said (with validity) that these brutal attacks were a drastic reaction to the actions of the seizure of their lands by white settlers, but, as Gwynne points out, the Comanches had been viciously waging war against other Indian tribes for hundreds of years before the first white settlers arrived on the American frontier.  The slaughter and torture of enemies had been a regular practice of the Comanches (as well as many other plains tribes) for generations.  War served as not only a method of protecting territory and resources, but as a means of striking abject terror into one's enemies, dominating them psychologically as well as physically.
Although Gwynne doesn't touch on the matter specifically, it feels like the cultures of the whites and the cultures of the Comanches were almost perfectly aligned to generate animosity toward one another.  The white settlers were determined, of course, to "civilize" lands that had served as the hunting grounds, homeland, and spiritual focus of the Comanches for many generations, utterly disregarding the fact that their settlement attempts constituted an invasion to the nomadic people that were already occupying their newly "discovered" lands.  The simple fact that the whites considered Comancheria to be theirs for the taking speaks directly, of course, to the fact that, to the whites, the Indians were less than fully formed people, undeserving of legitimate property rights.  For their part, the atrocities committed by the Comanches, not only against the whites, but also against other tribes, reinforced the notion in the minds of settlers that Indians were truly something less than human.  From such a standpoint it became easy to perceive the Indians as something to be destroyed, dominated, and overcome rather than a people to be respected or reasoned with.  The whites committed their own atrocities to be sure (plenty of massacres took place in which the elderly, women,  and children were slaughtered by government forces), but when confronted with the almost imaginative torture and mutilation inflicted by the Comanches upon relatively harmless civilians (not so dissimilar to modern-day atrocities inflicted by radical fundamentalist groups such as ISIS), it must have been relatively easy for the whites to discount the humanity of the Comanches.
For quite a long time, the Comanches held their own.  They halted the advancement of the American frontier, and, in fact, actually caused it to retreat for significant periods of time as settlers fled the horrors of the Comanche raids.
In fact, in some sense, it could be argued that some of the Comanche tactics were effective.  In the end, of course, the Comanches were defeated- killed, subjugated, and forced onto reservations.  The fighting strength of the Comanches, however, kept their culture alive much longer than it might have otherwise survived, and it brought repeated attempts by the government to negotiate with the Comanches rather than seeking to utterly destroy them (even if, in the end, the government rarely held up its part on the bargain in fulfilling treaty obligations).
At any rate, Empire really isn't a book about policy or philosophy.  It discusses the clashing cultures of the whites and the Comanches, but it seeks more to accurately describe them than to make judgments about them.
As I said, the book is full of human stories, examinations of the Comanches as a people, and vivid depictions of life on the American frontier.
I enjoyed it, and I would recommend it.
Though this country sometimes seems crazy now, it's always astonishing to think about how we got here.  America has been a wild, wild place.