So we had a 3 day weekend this weekend! President's Day!

On Friday night Amy was still stuck in a deposition, so Raylan and I went out for a father-son dinner at La Posada.  The place was lively, the waitresses doted on Raylan, and we got a table near the coin operated stuffed animal claw-grab machine, which was perpetually manned by three small girls with an endless supply of change.  All of this, coupled with chicken nuggets, made for a very exciting experience for The Boy (who had to overcome the initial disappointment of finding out that pancakes are not on the dinner menu).  I ate tasty chicken enchiladas.

We got home, got Raylan a bath, and put him to bed.
In the morning, Amy was bummed that she had missed La Posada, and Raylan was bummed that he hadn't gotten their pancakes, so we went back for breakfast.

After breakfast I think we just played at the house.  The weather was nice.  Amy went for a run, and I exercised after.
Later, Amy went over to Chad and Mary's new house to watch Truett while they ran back to their old place to grab some stuff.

Later on Saturday afternoon we went up to the Pinthouse Pizza on Burnet to meet up with Tommy and Kellie for Tommy's birthday.  Chad and Mary were also there with Truett, and Shelly and Kit were there along with Kellie's brother and some of their other friends.  It was fun!
Raylan got squirmy, so we didn't stay super long.  It was fun, though.  I wish we could have hung out longer.

On Sunday we went grocery shopping and ran errands.  I hung up a new mailbox that Amy got for us.  It looks cool!

Raylan took a long nap on Sunday.  In the evening Amy went out with Shelly and Emily.  It sounds like she had a really good time.

We had Monday off for President's Day.
It rained pretty hard overnight and into the early morning.
When it quit raining we went for some walks.
Mom and Dad came down in the afternoon and watched Raylan for a while.  Amy went running, and I went to see John Wick: Chapter 2.
Keanu Reeves shoots a whole lot of people in that movie.
It's violent, but the choreography of the fight scenes is really cool, if you're into that sort of thing.  It's also got a sort of interesting, stylized feel to it, with its depiction of a complicated, colorful, well developed criminal underworld.  The different kind of mobsters and hit men almost evoked feelings of the different gangs in The Warriors, especially given the protagonist's mission to simply reach his target with an entire criminal underworld seeking to do him in.
Anyway, it was fun.

After the movie we all hung out for a while.  Then Mom and Dad left and we ate some delicious pozole that Amy had made.  Very good. 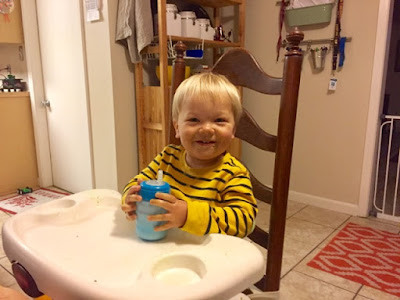 After dinner we watched Edwardian Farm.
Then I wrote a blog post.  And I'm still writing it.
Weird....