Hi!  Hope everyone had a good weekend.
We're really enjoying the cool, clear whether here in Austin.
Our weekend was sort of low key, but good.
Friday night we just were hanging out at the house.  We ate some Chinese food, and we started to watch an episode of Battlestar Galactica, but Amy fell asleep.
Saturday we got up, bundled up a bit, and walked up to Central Market for some breakfast.  It was fun.  Raylan was in a good mood and ate a lot.
Afterward we all went to the grocery store together and did some shopping.  Failing as a parent, I was unable to find a race car shopping cart this weekend for Raylan to sit in.
He didn't seem to mind too much.  He sat in a regular cart and pointed at things and shouted out names for them (correct, incorrect, and nonsensical).
Afterwards we took him to Joslin to play on the playground.


On Saturday afternoon we worked out while Raylan napped.  Then I snuck in part of the Longhorns game.
OMG.
We lost in overtime to Kansas.  Kansas!  They were 1 and 9!
Adios, Charlie Strong.  I still like you, but you're not even giving your defenders anything to work with.
I wish you the best of luck at your next job.

So I watched the game while playing with Raylan while Amy made soup.
We also played in the yard.
Later we went to Garrison Park.  We played on the playground and wandered around.  Raylan was amazed by the tractors that they use to cut the grass.
He also just loves running around and exploring.  It's nice to have such a big park so close to the house. 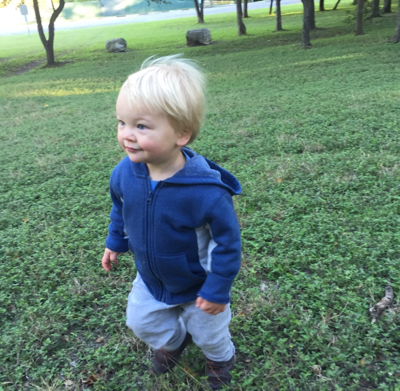 After the park we went home and just played a little more until Raylan had dinner and a bath and went to bed.

Saturday night we ate pizza.  We watched an episode of Battlestar, and this time Amy made it through.
On Sunday we got up and ate breakfast and then went to go visit our friends Jordan and Libby, and their new son, Rowan.
Rowan was awfully cute, and Raylan was pretty well behaved while over at their house.  It was really good to see them.  It was nice to be invited.
We went back to Joslin park later in the morning.  Raylan loves not only the playground equipment, but also running around Joslin Elementary, next to the playground.  While running up and down one of the ramps by the portable buildings (one of his favorite activities), he fell and faceplanted on the ramp.  In classic Steans family style, he did this just as we were leaving.
Never miss an opportunity to put a weird bump on your head before a family holiday, right, Raylan?

Anyway, in the afternoon we did a little bit of shopping/errands and played at our house some more.
Then I went to band practice (which was good).

Amy made spaghetti, which was really good.  Then we watched Westworld.  I continue to be impressed by that show.  We're enjoying it.

So that was our weekend!
Hope everyone has a good Thanksgiving this week!