Hey!Hope everyone had a good weekend!
Ours was pretty nice, but sort of busy with little chores and stuff.
I got home Friday night after picking up Raylan.  Amy was working a little bit late.  I took him out in the  back yard, and after running around for a little bit, he managed to sort of tumble onto his head on our back patio (while chasing after Cassidy, who was trying to hop away from him as quickly as her old, three-legged self could move).
So we went back inside.
Apparently Raylan's bump on the head, unexpectedly, resulted in a sudden ability to read!

Friday nightI don't think we did a whole lot.  We ate Chinese food and went to bed fairly early.
On Saturday we got up and went to the 2016 NAMI walk.  I try to do the NAMI walk every year.  Mental illness is a challenging thing to have to deal with for both individuals and their families.  I have a job which is kind of weird, since I prosecute cases that involve people who are struggling with mental illness, but the whole point of my position is strive for a level of empathy and understanding in dealing with these cases that might not happen in the regular court system.
It's tough to balance community safety with compassion for people who have legitimate, difficult health issues, but I enjoy my job, and I definitely want to try to approach it from a place where I strive to understand the issues on all sides.
NAMI provides support for those with mental illness and their families.  It's a great organization, and I'm happy to support it.
So we met up with Melissa, the director of the Mental Health Public Defender's Office, and her family, and walked the 5K loop from Auditorium Shores up to the Capitol and back.

In the afternoon we were at home.  Raylan ate lunch and took a nap and played a bit.  Amy took care of some chores.  I spent some time putting together a new bathroom cabinet that Amy had ordered online.  As usual with those sorts of jobs, it ended up taking longer than I expected.
We also went for a walk or two and there may or may not have been an impromptu trip to Dairy Queen for some ice cream (which may or may not have been precipitated by some shameless whining on my part).
Anyway, I ended up working out in the evening.


On Sunday we got up and went to Snooze.  Afterwards we all went grocery shopping together.  Raylan seems to sort of get a kick out of going  to the store.
Then there was a walk.


﻿
There was lunch, a Raylan nap, workouts for Amy and I, and a trip to get some Cassidy supplies.   Amy took Raylan to the park for a little bit before it started raining, and I seized the chance for a few minutes of uninterrupted acoustic guitar playing. 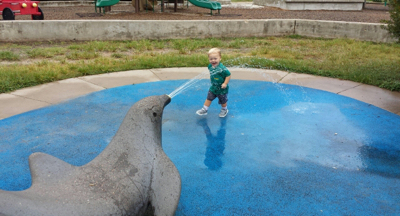 Then they came back and we all hung out for a little bit before I headed out for band practice.
Band practice was Reed, Frank, Jim, and I.  We had a good time.
I got home, and for dinner we had a beer-braised crockpot chicken dish that Amy made.  It was really good!
So, nice weekend.  Busy, but not very eventful.  It was a bye weekend for UT, so no football.
My dad had surgery on his foot on Friday.  I've spoken with he and Mom a couple of times, and it sounds like things are going pretty well.
Anyway, we wish him a speedy recovery!


Hope everyone has a good week!