Hey!  Hope everyone had a good weekend.  Ours was pretty laid back and nice.  On Friday I think we took Cassidy for a walk and visited with various neighbors that we ran into along the way.  Afterward we just hung out and watched some Friday Night Lights on Netflix.  On Saturday we went to Dan's for breakfast, and then wandered over to Radio, a coffee and beer place that opened near our house about six months ago. Looked pretty cool.  We'll have to go back when we haven't just eaten breakfast and actually order something!
﻿﻿﻿﻿﻿﻿Afterward we went grocery shopping and did some chores.
Saturday evening we went to an Oktoberfest party that was hosted by Amy's friend, Heather, and her husband, Toby.  It was really nice.  The weather was great, and they had beer and food.  They have a nice house with a nice yard over in Hyde Park.  We sat out back with some friends (people that we've gotten to know through Amy's office), and had a really pleasant evening.
Thanks to Heather and Toby for having us over!

On Sunday Amy made a nice breakfast for us.  We did a couple of chores, and then I went for a bike ride.  The weather was perfect for riding, and I hadn't been on the bike for a while, so I had a really good time.  I'll ride any time of year, but I'm also here to report that it's a lot more pleasant to ride when the weather is nice!
Sunday afternoon Reed came and picked up the drum set from the band room.  We're making room for the baby, so the band room is slowly getting cleared out.  End of an era, but I must be excited about this kiddo, because it's honestly not bothering me much.  I still wanna make music, but I'll still be able to play guitars and mandolin, and on the occasions when I still wanna have people over, our house is big enough to accommodate a small group of players by moving a coffee table or two around.
So it's all good!
Sunday evening we ran errands.
I think I've mentioned that Costco has really stepped up their beer selection.
So I got these. 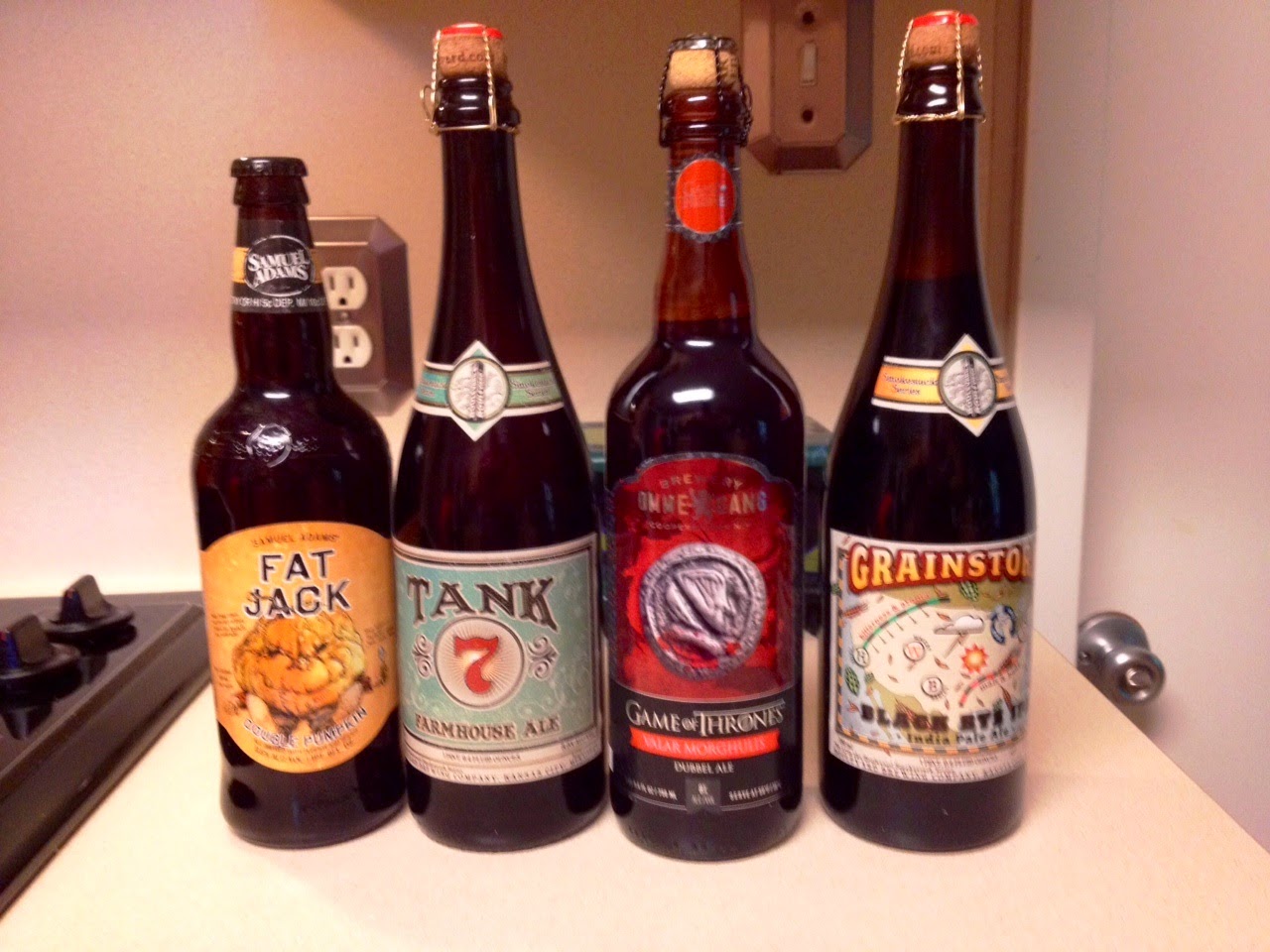 So that one on the middle right is called Valar Murghulis Dubbel Ale, and it's from Brewery Ommegang.  "Valar Murghulis", for those of you who aren't geeks, is a phrase from the High Valyrian language from Game of Thrones meaning "all men must die".  I wasn't sure I should buy it (undoubtedly gimmicky- but also sort of cool), and I haven't tried it yet, but Beer Advocate gave it an 86 rating, so I decided it was worth a shot.
Sunday night Amy made some really good fish tacos, and then we sat outside with Cassidy and did some reading for a while before bed.
Nice weekend!  Good weather and a nice chance to relax a bit while still getting some things done.