The Weeknd; ATX & The Golden Age

The weekend was good, although kind of weird.  Amy went to Phoenix to visit her family this weekend, and when she's gone I not only miss her but get a little disoriented and discombobulated.  She flew out Thursday.
Friday I went to dinner with my parents and my family for a little informal celebration of Mom's birthday. 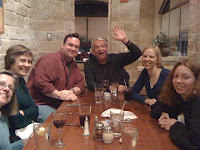 It was a nice dinner.  We went over to Brick Oven, and Ryan, Jamie, Susan, Ciara, Mom, Dad, and I all managed to brave some pretty serious rain in order to spend some time together. 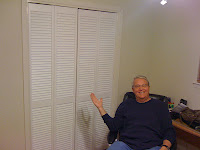 On Saturday I ran a couple of errands and exercise, and then Dad come over and we hung some new closet doors in my spare room.  The job ended up being a bit more challenging than either of us initially realized, but it turned out pretty well in the end.  We had a good time hanging out and doing a manly home improvement project (even if we struggled with it a wee bit).

Saturday night I had dinner with my parents and we ordered up Midnight in Paris to watch on cable.  I really enjoyed the movie.  I really hadn't read a whole lot about it, and if it was meant to be a profound piece of art, I'm not sure it succeeded on that level, but as a piece of witty, escapist entertainment with a charming message, I thought the movie was a good one.
I don't mean to give away too many spoilers, but one of the main themes of Midnight in Paris deals with the idea of "The Golden Age"- the perhaps somewhat romantic notion that some other, earlier, period in history was the "best" era to live in.  Midnight in Paris explores the idea of a golden age by following its protagonist, Owen Wilson's Gil, as he magically travels into the Paris of the 1920s, meeting many of its greatest writers and artists as he goes.
After the movie I ended up talking with Mom and Dad a bit about the idea of a golden age and about whether there there might have been other time periods that we'd prefer to live in as opposed to our own.
As I was driving home later I couldn't help but think about the fact that an awful lot of the satisfaction or dissatisfaction that people feel in terms of living through any particular period in time must come not only from the actual years a person is experiencing, but also the location in which their life is taking place.  The movie, of course, references this indirectly through the fact that the film takes place entirely in Paris, but it doesn't really discuss the fact that life in other parts of the world during the 1920s probably wouldn't be considered a "golden age" by almost anyone's standards (Germany, in fact, experienced an economic downturn and a growing fear of Russian communism in the 1920s that helped to fan the flames of its developing fascist movement).  In Paris, though, a center of cultural and social achievement,its easier to see how a person might have more easily come to the belief that the 1920s truly consituted a golden age.

These thoughts, in turn, got me thinking about our the age that we currently live in and about the city in which I currently reside.  More specifically, thinking about a golden age and the idea of "right place- right time" made me very thankful to have been living in Austin over the last couple of decades.  I don't think that this sentiment is merely a byproduct of having spent the majority of my life here.
If you're looking at America over the last twenty years or even the world in general, Austin hasn't been a bad place to be.  In the midst of a very bad recession, we've managed to weather the storm pretty well (our houses still have some value, our unemployment rate isn't horrible, and our cost of living- while higher than some other places- isn't nearly as high in many places on the west and east coasts).  Other places have entire neighborhoods full of homes that are underwater (in some cases abandoned due to foreclosures), but Austin has suffered only a relatively mild donwturn thus far.
We're a city that has been heavily invested in technology and computers since at least the 1980's, riding a wave of revenue and affluence fostered by electrical engineering, computer programming, and technological innovation.  We've experienced varying levels of success for decades now, some times stronger than others, but it's bee a long time since we really experienced failure.  We've had some ups and downs, but even our downs have left us faring relatively well in comparison to many parts of the country.
We have a well educated population.  We have a large number of highly educated people coming out of The Univeristy of Texas and other universities, and our technology industry has drawn a workforce to the area which is highly skilled and trained.
We have some culture.  We host music events, book festivals, art exhibits, film festivals, etc.  The Austin City Limits Festival hosts around 70,000 people for three days of music each year, and people fly in from all over the country and world to attend South by Southwest for both the music festival and the film/interactive/digital conference.  We've got our priorities straight, and to prove it we put the new Austin City Limits Music venue in one of the most prime pieces of real estate available- in downtown Austin, right across from city hall, in a space adjacent to W Hotel.
We have marathons, bike races, hot sauce competitions, and hippie laden birthday parties for fictional Winnie-the-Pooh characters.
People row boats on Town Lake (pardon me- Lake Ladybird), run on the greenbelt, climb on the rocks, and float in Barton Springs.
We two step to country, snap our fingers to jazz, shake our fists at rock, and stand cross armed, swaying slightly for our emo.
We have crazy lots of restaurants, new ones constantly opening and unusccessful ones failing at a rate that makes it hard to keep up with them all.  Chefs are moving here and trying out their skills, and the populace seems more than willing to give them a shot.  We love food.  We love to talk about food.  Many of us like to make food.  Central Market and Whole Foods both got their start here.
We have microbreweries and dogs parks and food trailers and....
It all wears me out.

But there have been moments, maybe standing out on the Zilker Park hill with the skyline in the background listening to good music during ACL Fest, or stepping out into the night with Amy on the balcony at the Moody Theater after a really great Wilco show downtown, when I would have been very hard pressed to think of another place and time where I'd rather be.
And I feel lucky for that.   Incredibly lucky.  I must not take that for granted.  You live only once, and I'm incredibly fortunate to be in the place where I am in the time that I'm living through, surrounded by some really great people.

I'm not sure whether this is the golden age, but Austin, Texas, in 2012 will do just fine.

Oh yeah.  The rest of the weekend?  Sunday I rocked out.  Had one or two drinks with Reed and did some catching up.  It was good.
Sorry about my rambling.