We had a good weekend.

As usual, Mom and Dad had the kids on Thursday.  Raylan was congested and took like a two and a half hour nap on Thursday (which is totally unusual for him), so we decided to keep him home from school on Friday, because we thought he was getting sick.

Well, I had a doctor's appointment in the morning, so Mom came back over and hung out with Raylan for a little while.    The three of us went out for pizza at Cane Rosso for lunch.  It was fun!  We had a good time.  Aside from having a bit of a scratchy voice and coughing every once in a while, Raylan seemed fine.

Mom took off after lunch.  I tried to play some quiet stuff with Raylan in the house so he could get some rest (we made it through a game of checkers and part of a game of chess and built some forts).  By the mid afternoon he was restless and wanted to burn some energy off, though.  We went on a bike ride, and we rode to Central Market to get some gelato.

Friday night we had dinner at home.  After the kids were in bed I played guitar in the garage for a while.

On Saturday we went to Kerbey Lane for breakfast.  We initially planned to go to the park after that, but the kids wanted to play at our house, so we hung out and played in the yard during the morning, instead. 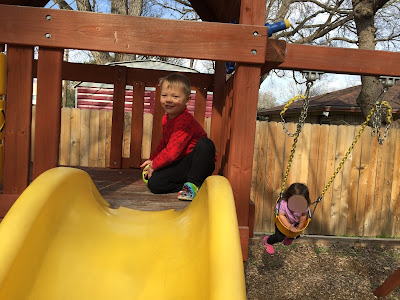 In the afternoon I took the kids to Garrison Park for a while.  Raylan did a good job on the monkey bars, and Kiddo found some kids her own age to play with. 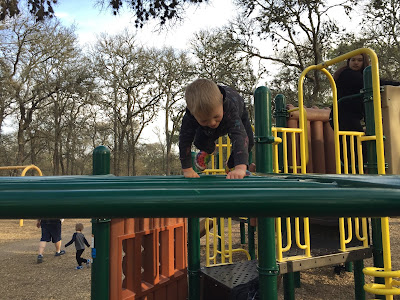 Also, while we were there, an ice cream truck stopped by.  The was sort of a big deal.  Raylan has seen ice cream trucks on TV, and we have heard them wandering around our neighborhood, but they never seem to come down our street.  We've never actually been to one before.  Having heard the nearby music, we've even thought they were going to drive by our house, and we stood out in our front yard waiting for one to appear while clutching out money.  But sadly and slowly the music always faded away...
Not this time!  Kind of weird that the kids first got to go to an ice cream truck in February, but whatever.


On Sunday morning we got up and I went to pick up the groceries.  The kids wanted to go to the store, so the three of us piled into the Kia Sorento, and off we went.

Sunday morning we took the kids to Joslin.

Sunday afternoon Amy went to a little wine tasting at Mandy's house.  Afterwards the family ate dinner.  Then Frank came over and we played acoustic guitars in the garage.  It was some serious rockin'.

And that was the weekend!  Hope everyone had a good one.