Hey! Hope everyone had a good weekend!  Ours was pretty good, but fairly low key.

Friday was bike to work day.  I rode my bike to work.  Stopped off at City Hall to pick up some free sunglasses and other free stuff.


On Saturday we got up and went out to breakfast at Kerbey Lane.  Afterward we went to see a children's play called Acorn and Robin at the Carver Cultural Center.  The play was interactive, and the kids seemed to enjoy it.  Kiddo was really interested, and she even wandered up on stage during some of the interactive parts of the performance.  Raylan told me he was a little bit scared of the people in the "weird costumes". 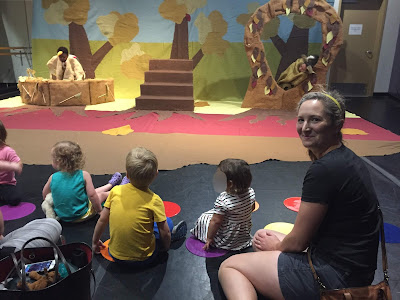 After the play the kids played on the playground outside the Carver Center.  We video chatted with my parents, who are still on their trip to Israel, while outside on the playground.  It was good to see them.

Later that morning we went to PetSmart and bought a little fish tank.  We set it up on Saturday, bought a fish to put in it on Sunday, and by Monday morning that fish had gone to the big fish tank in the sky.  Not sure what happened to that fish.  Raylan had named him Cat.

On Sunday I picked up our groceries and took Kiddo to TuneBugz.

Sunday afternoon the kids played at the house in the kid pool and with the sprinkler.


Sunday afternoon Frank came over and we played guitar for a little while.  It was fun.

Sunday night we watched the series finale of Game of Thrones.  I felt like it was sort of a letdown.  Bran has been pretty lame for a while on the show, and now he's the king?

Anyway, that was our weekend, for the most part.

Sorry to hear about the fish! Hope the next one fares better.

Thanks! Cat, we hardly knew ye!