Hi!  I hope everyone had a good weekend!
We had a nice one.  Last Wednesday Amy's mom, Jean, arrived in town with Amy's grandparents, Carol and Jerry.  They stayed until Saturday evening, and we had a nice visit with them.
Wednesday night we took them out to La Posada for dinner.  They seemed to enjoy our South Austin Tex-Mex haunt, and Raylan had a blast going out to dinner with everyone.
On Thursday I went to work, Raylan went to swim lessons and spent the day with my mom and dad, and Amy took a drive out to Georgetown to look at some houses in Sun City with her mom and grandparents.  Amy's family are considering purchasing a retirement home of some sort in the Central Texas area, so there was some house hunting going on while they were here on this trip. 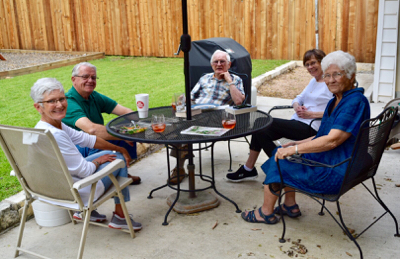 Coming from the Phoenix area, they're very familiar with the Sun City developments (Carol and Jerry lived in a Sun City development for years), but they wanted to get a look at the Texas version.  I think they liked it.  I think.
Thursday evening we ate at the house and Raylan ran around the back yard.  The spring weather was nice, so we just sat on the back porch and talked and ate dinner.
On Friday I took the day off from work to hang out with Amy and her family.  In the morning we went out to my parents' house and then Rick and Jeanne Farleigh's house.  Amy's mom, Jean, is a talented quilter, and Jeanne is a talented quilter as well, so Amy wanted her mom to see Jeanne's quilting room and set up.
I had never been out to the Farleigh's house before, and they have a beautiful place.  They live on Lake Austin, on the far edge of the Steiner Ranch area.  Anyway, we had fun just walking down to the lake and playing with their dogs and talking to the Farleighs.  Both Amy's parents and the Farleighs have Cavalier King Charles Spaniels, and, in what turned out to be a "small world" moment, both dogs (Lulu Farleigh and Molly Davis) came from the same breeder in Arizona.  Crazy, huh?

After spending some time at the Farleigh's, we drove out to the Oasis for lunch.  It turned out to be sort of cool and breezy while we were out there, so we ended up sitting inside, but it was a nice lunch, anyway, and Amy's family got to wander out onto the decks to take in the view of Lake Travis.

After lunch we headed home and got Raylan a nap.
After his nap Raylan got to play in the backyard, mostly with Nana (Jean) and Poppy (Jerry).  He had a blast.
We ordered some Indian food from Tarka for dinner, and Jerry had salmon from Central Market.

On Saturday morning we got up and had breakfast and then drove out to San Marcos so Amy's family could see a bit of the town and see Kissing Tree, a new retirement community that is being built there.  We tried to stop at a children's park in San Marcos, but it was under renovation.  There was still a very nice park beside the river, though, and Raylan got to wander around with everyone and explore.  He had a really good time.


Surprisingly, Raylan also really enjoyed looking at model homes at Kissing Tree.  He kept telling me how much he liked the "fancy showers".  He also seemed intrigued by the decorations that were used to stage the houses (the wall clocks, in particular, proved fascinating).

After San Marcos we headed back home so we could get lunch and a nap for Raylan.

And that was about it.  Amy's family had a light lunch and then headed out to the airport shortly afterward.
We had a really nice visit with them and appreciate them coming out!

On Sunday we ran some errands, mostly.
We stopped off to snap a few pics of Raylan in the spring bluebonnets.

Here are some shots from the photoshoot....


And that was pretty much the weekend!
Last night I had Mono Ensemble practice with Reed, Frank, and Jim.
It was fun.  We sounded pretty good.