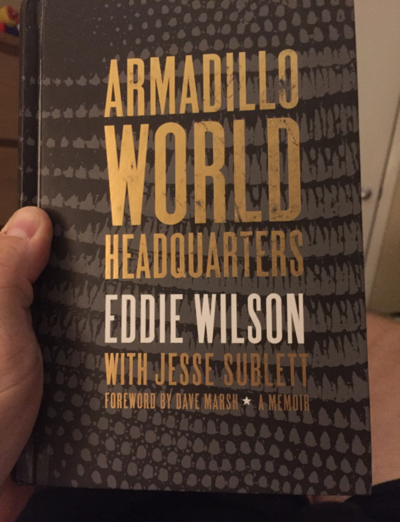 For those who don't know, the Armadillo World Headquarters was a fairly famous music venue in South Austin that existed through the 1970's.  It's credited with bringing cowboys and hippies together, helping to give birth to a new form of "redneck rock".   Also, along with other famous venues like Threadgill's, Antone's, and Liberty Lunch, it's said to have to have helped to establish Austin as a legitimate music scene.
This particular book about AWHQ was written by Eddie Wilson, an investor, concert promoter, and sort of locally famous personality.  Wilson was also one of the early key players and founders of AWHQ.
A quick glance at the few reviews of the book on Amazon left me with the impression that many of them had been written by friends of the author or by people who didn't actually read the book.
So, even though I checked the book out of the library instead of buying it through Amazon, I left a review of my own:
"Austin needed a book about the Armadillo World Headquarters and the music scenein which it existed- it's just that Eddie Wilson probably wasn't the best guy to write it. Wilson, by his own admission, spent most of his time steering clear of the musicians and artists who actually brought fame to the Armadillo. When he actually did interact with artists, it feels like many of them may not have trusted him. It was hard for me to come away from this book feeling like I was even getting a true story from Wilson much of the time (he constantly speaks of AWHQ money problems and tries to assert his own hippie cred, taking advantage of hippie culture to garner employees who work for free or next to nothing to help establish the Armadillo, while Wilson, himself, doesn't seem to noticeably have much trouble paying his own bills while living in a house in the posh neighborhood of Tarrytown).Wilson's focus on business means that the book spends more time discussing marketing campaigns, minutiae regarding building renovations, and lease agreements than it spends on getting to know any of the actual musicians who brought fame to the Armadillo or their concerts.Wilson has a perspective, to be sure, and he manages to conjure up a few interesting tales to tell from his own point of view, but I felt like, this really wasn't the book about the Armadillo World Headquarters that I was looking for."
Anyway, the book wasn't terrible, but it wasn't great.  There were times when it painted a pretty good picture of what it was like to own and operate a large, famous business filled with hippies and odd characters in Austin during the 1970s.  There are various stories of drug use, hedonism, and arguments between various stakeholders in the busniness.  Respect is paid to some of the artists who helped keep the business on its feet (Wilson seems to really love the artists who made the promo posters for the Armadillo and the cooks who ran the kitchen), but I never really got an in-depth feel for the music side of things, and that's what made me want to read a book about the AWHQ in the first place.  Most of the stories about musicians are pretty short, and the descriptions of actual shows at the Armadillo are generally limited and sort of perfunctory.

Oh well.  It was a decent description of the Austin scene at the time, I guess.
I was just hoping for more in terms of the views, attitudes, inspiration, and mindset of musicians who lived in and passed through the Armadillo World Headquarters over the years.
Maybe a book by the sound engineers or other people who actually worked more with the bands is what I was looking for...
Posted by J.S. at 6:37 AM