Hey! How are you guys? Anyone? Anyone? Our weekend had a rough patch or two, but ended up being pretty decent.
On Friday I came down with a stomach bug.  Raylan caught it earlier in the week, and then I caught it from Raylan.  I had planned on taking Friday afternoon off from work, anyway, because President Obama was in town to give a SXSW Interactive keynote address (on the interaction between government and technology).  Mayor Adler had issued a public warning that the traffic would be snarled up downtown due to SXSW and the road closures for the President's motorcade.  We were all encouraged to work from home or take some time off.
Well, Raylan's stomach bug helped turn my half day into a whole day off.
I felt pretty bad.  Thanks to Amy for unexpectedly and gracefully dealing with an active Raylan and a sick Steanso.


We watched some of the live broadcast of Obama's talk.  He said some fairly thoughtful things about the need to get more talented people from the tech field involved in government work (it might not be as lucrative to help educate low income children as it is to design the next Angry Birds, but it might be more important) and about the need to balance digital privacy with safety concerns (it's probably not realistic to create digital devices that are completely impregnable to the government because they will be used, eventually, by our various enemies- BUT we can severely restrict access to secure devices both through a very limited set of digital "keys" and through judicial oversight).
Anyway, I thought his talk was well reasoned.
We also got some fairly serious rain on Friday.


On Saturday we got up and did some chores.  I was still moving kind of slow and feeling weird, but felt much, much better than Friday.  We went for some walks and got out a bit.  We even went over to Central Market.  It felt good to get out of the house.
In the afternoon I put a pantry shelf cabinet together.  We put it in the laundry room to give ourselves some more storage.  Our little house doesn't actually have a pantry closet, so kitchen storage space is always an issue, but hopefully this will help.


On Saturday night Amy watched Mad Max: Fury Road with me on HBO.  Well, she watched most of it.  During some of the more intense moments she was peeking out from behind a pillow.
But, she watched enough to get the general gist.  I'm not sure it was entirely up her alley.  But she didn't complain, and she tried it out.  I love my wife.
On Sunday we went to breakfast.  Amy was feeling sort of worn down afterward, so I took Raylan with me to the grocery store while Amy caught up on some much needed caregiver rest.
Afterward we went to the park.  The weather had turned really nice.  Raylan loved being outside, and we had fun being outside with him. 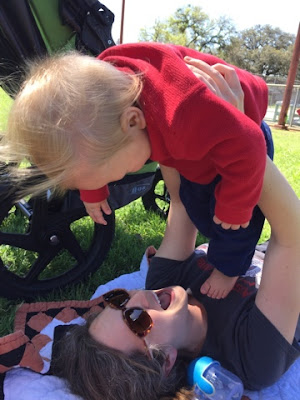 Later we took turns working out and Raylan wrangling.  We ate some lunch.


In the evening I went to band practice.  Somehow while I was gone, Amy managed to make a Mexican casserole while simultaneously taking care of  our kid.
And it was good!  We both enjoyed it when I got home.
And that was the weekend.
It was good when I wasn't sick!


The Davis/Sinex clan is in California right now, going to Disneyland.  Hope you guys are having fun!  We want to see pictures!!