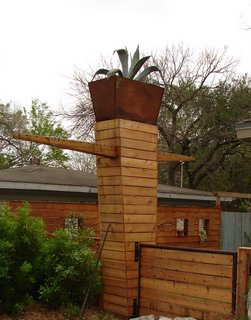 Friday's here again, and not a moment too soon. I came home last night and went over to Mandy's house to help cover up a few of her remaining plants (we had moved some of them the night before, but Mandy has lots of plants). Most problematic of all the plants (in terms of winterizing them) was Jeff's "Agave Bot", a giant agave which sits atop a wooden tower at the gate to the Wilson's backyard (another one-of-a-kind Jeff Wilson creation. If you're looking for any kind of practical reasoning behind why Jeff put an agave atop a tower at the entrance to his backyard, you probably didn't know Jeff that well, and you're certainly not going to get much of an explanation from me. I would assume that it's probably some kind of pagan totem or navigation beacon for alien landing craft). Apparently agave plants don't do well in freezing temperatures, so Kate, Judy, Mandy and I gathered shortly after dark last night as the temperatures dropped and worked on getting a tarp put over the agave to keep it from freezing. The process involved ladders, extension poles, old Chuck Taylor sneakers (meant to be used as weights- one of those sneakers is still up there in the planter), and considerable risk to life and limb (Kate is more nimble than she looks and can scamper up a ladder faster than a howler monkey with its ass on fire), but eventually we were successful in covering up the plant and securing a tarp over it.
After dinner we ate soup, salad, and sandwiches, and Susan came over and hung out. It was especailly good to see her since I hadn't seen her for awhile.
After Susan took off, Mandy made pesto out of some basil that she had picked from her garden (I think that was a preemptive move to use the basil before the cold weather got to it- Mandy got some decent sized lemons off of her lemon tree as well). I helped Mandy make pesto by sitting on her sofa watching TV and complaining about the overpowering smell of the basil (which smelled really strong, but tasted pretty good in the pesto).
Then I went home and went to sleep.
Well, Adventurers, it was cold, and last night Steanso's heat didn't seem to be working properly. At about 4:30 a.m. I woke up with a numb nose and some numb toes, realizing something had gone wrong. The heater kept coming on, but it was just blowing cold air. Cassidy and I huddled under the blankets and used a space heater to keep from getting too frosty. Stupid heater.
Well, at least it's finally feeling like winter.
That's it for now, I guess. Have a good Friday.
Posted by J.S. at 2:18 PM

Being a tequilla man and a admirer of the wooden tower that it sat upon (as well as the entire Wilson backyard), I'm glad to hear all efforts were made to save. I think Jeff considered Agave Bot to be the king of the backyard realm (at least I remember him posting about it one time on his blog).

Hope everyone is doing well on Tejas Trail, and that you get your heat working. It's supposed to stay cold throughout the weekend. I do love the cold weather though.

It's about time the phrase:

"howler monkey with its ass on fire"

made it to the adventures. I think that's an image we can all savor in our heads.

If it's that cold, you and Cassidy can stay at our house, you know...