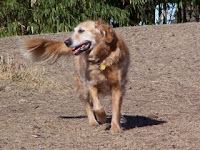 Hey. Not a lot going on today. Mel is in surgery today, having a malignant growth removed from his mouth. Mel is my brother's golden retriever, and his gentle nature and fondness for people made him a family favorite many years ago (taking Mel swimming and taking naps on the sofa with Mel are, personally, two of my favorite Mel activities). Anyway, I'm thinking Mel will be fine after this surgery, but we wish him best of luck, nonetheless. Here's a repost of a pic of Mel at the park from a couple of weeks ago.

What else? Not a lot. Here's a column from Michael Kinsley in Time Magazine about this possible recession and this new economic stimulus package. Kinsley's column sort of articulates some of my worries about the whole thing. As I've said before, I'm not economist, but it just seems crazy to me to try to solve an economic crisis that was triggered by irresponsible borrowing and spending (I'm mostly talking about the subprime mortgage schemes and other, similar poor lending and borrowing habits) by dumping more money on the public (free money, this time, at that) and asking them to spend it. As the column says, it feels kind of like rewarding an alcoholic for his hangover with another drink.
Republicans want to finance this cash handout by cutting government programs, and/or by borrowing from other countries (this second, more embarrassing option, the one which simply digs our country into deeper debt and fiscal irresponsibility, is not discussed nearly as proudly as the first). Republicans believe that only the American public and private businesses know how to properly invest money, so we should pump the money back into the hands of American consumers. Problem is, our current crisis developed because both the American consumer and American lending institutions got greedy and a little irresponsible. Seems like true conservatives should just want to let the market make its natural correction (trusting in the market to make its own adjustments- to reward wise, smart investing and to weed out some of the riskier or more foolish behavior), but our neocons in the White House and on Capitol Hill aren't willing to put the country through the sting of letting a natural market correction happen. Thus, the rush to hand out free money and the attempt to artificially reinvigorate the economy.
The column touches upon the more Democratic option of actually increasing government spending in order to get the economy on track (building bridges and infrastructure, for example, would employ more workers who would then bring home a paycheck and pour more money back into the economy with their spending), but it doesn't discuss this in great depth. Like I said, I'm not an economist, but if responsible government spending was feasible enough to help get us out of the Great Depression (e.g., most famously, the Works Projects Administration of the 1930's), then maybe we ought to at least show the idea some respect.
And in the end, don't get me wrong- I'm not going to be turning down any kind of government check that shows up in my mail. My question is, if I blow all of that money in a month or two and the economy still isn't turned around, do I get more free money to do some more stimulating? If so, this is looking like it's going to be one of the best recessions ever!!
Posted by J.S. at 1:45 PM

I'd need to check some sources on this, but the thing that pulled us out of the Depression was not the WPA, it was World War II. Either way, a heck of a lot of money was exchanging hands by the government, from soldiers getting paid to manufacturing to farming.

What the WPA and other programs did was give the 25% of the population that was unemployed an opportunity to work. This included, by the way, kids. I was talking to grandpa about his work at a "work camp" (much less scary than it sounds), where he was able to bust rocks, etc... and bring money home for his family.

There's an interesting diffence between the two, that people were expected to work for the money they received and public works were accomplished. Many of those projects still power the country, are recreational areas (see: San Antonio's Riverwalk), and generally benefited the city, state or country.

I can neither wrap my head around a 25% unemployment rate, nor a government which would mobilize quite that way.

That said, despite the common complaints about the "public service sector employee", some enormous number of people, over 10%, are employed by local, state or federal government programs in one way or another. So perhaps it never really went away after all.

I knew someone was going to spout out the fact that the WPA didn't end the Great Depression, and I shouldn't have written that the way that I did, but the WPA and other parts of the New Deal certainly had helped to bolster the U.S. economy, which went on the upswing for a while with the New Deal, getting better with these government spending programs in place (unemployment fell by 2/3 during Roosevelt's first term, from 1933-37) until we hit another recession in 1938, which knocked unemployment down again until the war. Keep in mind, though, that even the military spending of the war was, in a sense, economic stimulus provided through increased government spending (quick note- just want to point out the fact that I'm NOT advocating war or the expansion of it in order to boost the economy... although I'd like to see government money pumped into something besides the military with the same fervor that we build our military- can't we reinvest ourselves in the space race again or something? The space race seemed to have some of the economic benefits of a war without having to actually kill a bunch of people)

in any case, going into debt to goose the country's economy seems weird.

Agreed. We've put ourselves in debt before in order to try to jump start the economy (The New Deal raised debt to 40% of the GNP, and once WWII started, debt rose to 128%), but it's scary business, and our conditions today are a wee bit less severe than they were during the Depression (right now our economy isn't even shrinking- it's just not growing as fast as it has been previously). I think the real question is, if we are going to spend some governement money on economic stimulus, what's the most effective way to do it? And somehow giving free money to the public and asking them to spend it (as opposed to saving any of it) just feels like a very strange and shortsighted solution. But like I've said- economics isn't exactly one of my strengths.