Hi!  Have I mentioned how much easier it is to blog when I don't have to blur out Bella's face for each post and remember to call her Kiddo instead of Bella?  It's a lot easier.
Well, out week was pretty good, except for one horrible tragedy.  On Wednesday we had the day off for Veterans Day.  Thank you for your service, Dad, Greg, Jerry, and any other veterans who might read this!  On Veterans Day Amy and I both had the day off, but Raylan had school and Bella spent the day with Grandma and Papa.  I went for a bike ride.
Well, halfway through my ride, right downtown on Congress Avenue, my back wheel started to wobble from side to side on my bike.  I thought I had a broken axle (which had recently been replaced).  I walked the bike back over to Guadalupe, put it on a bike rack, and rode home.  When I got home I took it into the bike shop.  They called me a few hour later to tell me that the frame had actually broken.
Nooooooooo!!!!!
That's like the one thing that you really can't fix on a bike.
So my beloved bike has bitten the dust.  I put several thousand miles on that bike.
I've ordered a new bike, but I'm nervous.  That last bike lasted a long time and was, all things considered, a really tough workhorse.  I'd also modified a bunch of the parts on that old bike to make it fit me better (handlebar risers, a custom rear wheel, a different seat, etc.).
Ugh.
Sad to see that old friend go.  It helped me maintain my physical and mental health for a long, long time.
In other news, we just mostly had a pretty normal week.

On Saturday we went fishing at Lake Walter E. Long over on the East Side.  In Steans family tradition, we didn't catch any fish, but we had a good time. 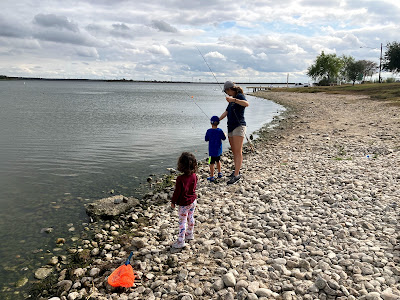 On Saturday the kids spent the night with my parents.

On Saturday night I had band practice at Jim's house.  We had a good time.
On Sunday Frank and I took a basic gun class.  I've gotten a pistol from Jerry and Carol (thank you!), so I wanted to take a gun safety class.  It was fun!  We were only supposed to shoot pistols, but the instructors (who were 3 military vets) got out some shotguns and AR15s, and we shot those as well.
It was a fun way to spend a few hours.
Then the kids came home and we played and Amy made pad Thai and we all went to bed.
And that was our weekend!
Posted by J.S. at 7:30 AM