Hey!  Our weekend was pretty good.
On Saturday Raylan had a soccer game.  His Grnadma and Papa came out to watch, and I brought Kiddo to watch, as well, and to play on the playground near the field.

After the soccer game my folks came over to the house along with Jamie and Ryan.  We all watched the Texas-OU football game.  Texas didn't play all that great.  We lost by one touchdown.  I feel like if we'd been playing at our best (not missing so many tackles and collapsing on the offensive line) we probably could have won.

Oh well.
We ate pizza and chips and cookies and had a nice family gathering.

After the game and nap time for Kiddo, we mostly played in the back yard. 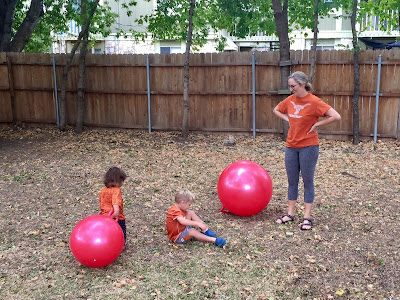 On Sunday we ran some errands and took a walk or two.  We tried to go shopping for Halloween costumes, but without a lot of success (and some lady struck my car while I was in the Halloween shop, but at least was nice enough to leave a note).
It was a pretty low key day.

And that was the weekend.
It went by fast.
Have a good week!