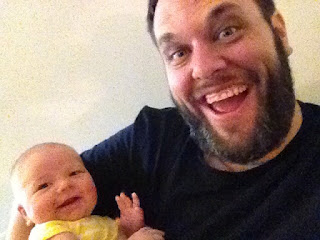 So this weekend was my first Father's Day! It was pretty good!
On Saturday we got up and I went grocery shopping while Amy gave Raylan a bath and took care of other Raylan-related tasks.  Mostly the day involved a lot of puttering around and getting various things done.  I got a haircut.  Ryan and Jamie came by to visit for a while, catch up, and say hello to Raylan.  I think that on both Friday and Saturday evenings we watched the first couple of episodes of The Americans.  I'd heard enough about the show to become intrigued by it, and then I started trying to avoid conversations with people about it because I knew that I wanted to watch it, but my friends and my brother can't seem to talk about this show without dropping spoiler bombs.
Anyway, it seems to be living up to the positive things that I'd heard about it.  I know it's been said before (because, like I said, spoilers), but it's a pretty interesting and amusing narrative trick to get the audience so invested in the well being of a couple of Soviet spies- people who earnestly discuss their belief that Ronald Reagan is a nuclear-armed madman who is hellbent on the destruction of the Soviet Union, even at the potential cost of world destruction.  You could see how a couple of well-meaning Soviet spies might feel the need to protect their country from such a man!
Anyway, we're enjoying the show.


On Sunday we went out to Mom and Dad's.  It was Ciara's birthday, so we had hotdogs and hamburgers and celebrated with Susan, Ciara, Donald, and a few of Ciara's friends.
We also celebrated Father's Day.  Amy got me a Millenium Falcon t-shirt, a Pink Floyd t-shirt, and a cup with Raylan's picture on it which declares me to be the best dad!  Very nice and very fun.